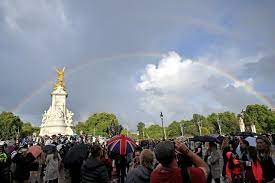 By Wisdom Deji-Folutile
Members of the public outside the grounds of Buckingham Palace were awed as a double rainbow appeared after a heavy downpour.
The stunning visual came amid increasing concerns about Queen Elizabeth, 96, who at the time was under close medical supervision at Balmoral in Scotland her passing was announced around 6:30pm.
The rainbow, arching over the royal residence, was treated reverentially by a thronging crowd, many of which had hoped it was a sign that the Queen would recover.
The rainbow could be seen over major landmarks across the capital including Elizabeth Tower in Westminster and the Queen Victoria Memorial.
People among the thousand-strong crowd outside the Palace gates in central London turned round to take pictures of the rainbow. Shortly after, Buckingham Palace announced the Queen died peacefully at Balmoral.
Peter Barnes, 31, a campaign director who works in central London, told the PA news agency that the mood around the royal palace was “very somber”.
“Many people in the crowd commented on the rainbow with many taking photos.”
Mr Barnes said: “The crowd is only getting bigger so I imagine it won’t be long until people begin laying flowers.
“The Queen means so much to so many people not just here in the UK but around the globe.
“The world has lost a bastion of stability and dignity putting country and duty above all else.”
Buckingham Palace said: “The Queen died peacefully at Balmoral this afternoon.
“The King and The Queen Consort will remain at Balmoral this evening and will return to London tomorrow.”
The royal family’s official website now reads: “Queen Elizabeth II 1926 – 2022” along with the official statement issued by Buckingham Palace.
Elizabeth Alexandra Mary Windsor was born on 21 April 1926, in a house just off Berkeley Square in London, the first child of Albert, Duke of York, second son of George V, and his duchess, the former Lady Elizabeth Bowes-Lyon.
The Queen’s sense of duty is well known across the world, after seven decades as head of state.