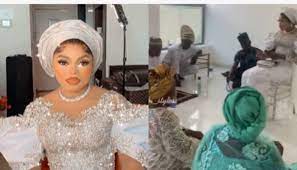 The Muslim Rights Concern  (MURIC) has shown indifference in the aftermath of a social media video showing Muslim clerics praying at the housewarming ceremony of the controversial crossdresser, Idris Okuneye, also known as Bobrisky.
MURIC also emphatically expressed that it is Bobrisky’s personal life, despite heavy knocks from Muslims across social media.
Recall that a video purported to be from Bobrisky’s house opening at Lekki trended on Sunday. The house is said to be worth N400 million.

Bobrisky was seen seated and fully clad in female Yoruba traditional attire, surrounded by Muslim clerics who sat on the floor and offered Islamic prayers.
Asked to comment on the development, Director of MURIC, Professor Ishaq Akintola,  stated that “the event is outside the scope of our projection, and whatever may not interest our movement cannot make us move.”
Distancing himself from the event, Professor Akintola said: “I will not comment on the issue. It is his personal life.
“I saw the video of Muslim Scholars praying with him, [Idris Okuneye]. I cannot comment on the scholars also.
“I want to stay away from this controversy. For us in MURIC, we are all about the Muslim brotherhood and their welfare.”