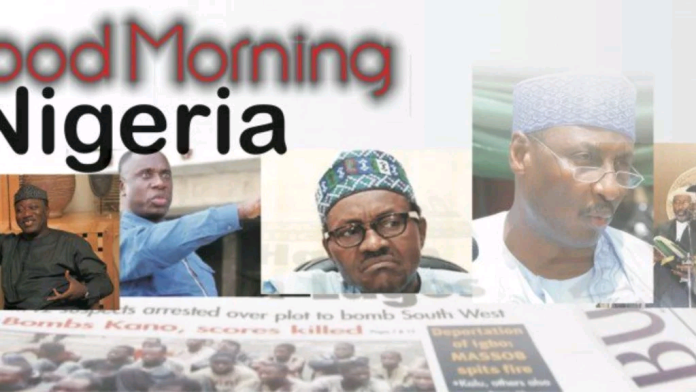 1. Inspector-General of Police, Usman Baba has assured the public that the security agency was making progress in the probe of famous gospel musician, Osinachi Nwachukwu’s death. At a meeting with Minister of Women Affairs, Pauline Tallen at his office in Abuja on Wednesday, the IGP said the singer’s death was heart-breaking.

2. The All Progressives Congress, APC, has fixed N100 million for its presidential nomination and expression of interest forms. APC National Publicity Secretary, Felix Morgan, disclosed this while addressing journalists in Abuja, on Wednesday.

4. An elected councillor in Katsina State, was on Wednesday, shot dead. Alhaji Nasiru Magaji, the late councillor, who was popularly known as Nasiru B.S, was killed in Gozaki town of Kafur Local Government Area of the State. A source in the community told DAILY POST that the councillor was shot in his residence.

5. Nigerians in Diaspora Commission (NiDCOM), says 13 of the 19 Nigerians held in different camps in Poland have been released. NiDCOM announced this in a statement signed by the Head of Media, Public Relations, and Protocols Unit, NiDcOM, Abuja, Abdur-Rahman Balogun, on Wednesday.

6. President Muhammadu Buhari, on Wednesday, warned of tougher security measures in restive parts of the country, with the review of operations and strategy. Speaking at a meeting of the National Executive Committee (NEC) of the All Progressives Congress (APC), the President noted that major security challenges have remained in the North Central and North West, saying, “we are going to be very tough.’’

7. The Nigerian Air Force (NAF) on Wednesday said it would conduct a thorough investigation into the cause of its Super Mushshak trainer aircraft crash that happened on Tuesday at NAF Base, Kaduna. The Director of Public Relations and Information, NAF Headquarters, Air Commodore Edward Gabkwet, said this in a statement on Wednesday in Abuja.

8. The Indigenous People of Biafra, IPOB, on Wednesday, blamed the latest killings in the Orlu area of Imo State on Nigerian security agents. IPOB’s spokesman, Emma Powerful, said the Nigerian military and operatives of the Ebubeagu security outfit are responsible for the attacks and killings in Imo State.

9. The Socio-Economic Rights and Accountability Project, SERAP, on Wednesday urged President Muhammadu Buhari to take steps toward ending the strike by the Academic Staff Union of Universities, ASUU. The body made the call in a series of tweets via its Twitter handle.

10. Former Lagos Governor, Bola Tinubu has disowned posters portraying Vice President Yemi Osinbajo as Judas Iscariot. A statement by Tinubu’s media office said crediting such a description to him is the most desperate antics of propagandists in recent times.