Nigerian teen who had 9 A’s in WAEC offered N1.9bn scholarships in US & Canada 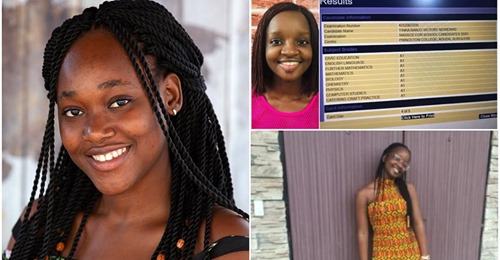 A 17-year-old Nigerian teenager, Victory Yinka-Banjo, who had nine A’s in WAEC in 2020 is in the news again for even greater things.

CNN reports that Victory was offered full scholarships by Ivy League schools; Yale College, Princeton University, Harvard, and Brown College in both the US and Canada to the tune of more than $5 million (N1,902,500,000).

In speaking with the media, the teenager said that the whole development came as very surprising to her, adding that she never thought any school would even offer her admission.

Victory said that the deluge of scholarships has made her more proud that she now praises herself for a job well done. Other Canadian schools where she got offers from are the University of Toronto and the University of British Columbia.

US universities like the Massachusetts Institute of Technology (MIT), Standford University, John Hopkins University and the University of Virginia also want her.

The 17-year-old Nigerian said she is however still researching some of the schools that she would like to go like Johns Hopkins, MIT, Havard, and Stanford.

Her mother, Victory, said that she hopes that her daughter’s success story would inspire other young people out there since she is not the typical Nigerian-American who often gets such an opportunity.

The mother attributed the secret of her daughter’s success to discipline, parental guidance, and faith.

A Nigerian first class graduate of Mathematics, Maniru Ibrahim, has been offered a €20 million scholarship for a four-year PhD programme at Science Foundation...
Read more
Edu-Stars

Nigerian American Tani Adewumi is only 10 years old, but he has just become a U.S. Chess National Master with a rating of 2223. His...
Read more
Edu-Stars

Chad's President Idriss Deby has died while visiting troops on the frontline of a fight against northern rebels, an army spokesman said on Tuesday,...
Read more