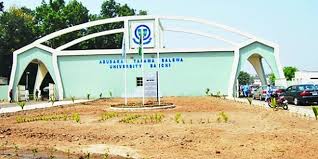 The Abubakar Tafawa Balewa University (ATBU), Bauchi, has invented a disinfection machine to curb the spread of COVID-19 in the country.

The Vice-Chancellor of the University, Prof. Muhammad Abdulazeez made this known while unveiling of the machine in Bauchi.

According to the Vice Chancellor, the invention aligns with the mandate of the university, as a centre for research and invention. He also said the university looks forward to inventing ventilators for the treatment of patients with stage II of COVID-19 infection.

“Technologists, engineers and other professionals in the university have fabricated a prototype of a ventilator which is cost-effective and efficient.

“The team also fabricated an aerosol box that can be used to protect medical doctors and other medical personnel treating patients that have tested positive for the virus by placing the box to cover the head, mouth and nose of the patient,” he said.

Speaking further, the VC said the high cost of purchasing equipment used in the treatment of COVID-19, lassa fever and other infectious diseases prompted the university to venture into the invention.

“The university decided to go into deep research and at the end was able to come out with prototypes of the machine,” he said.

Abdulazeez, having stated funds as the major constraint to massive production of the machine, called on all tiers of government to support the Mechatronics Engineering Department of the university as it was not out to make profits .“We are not in this to make profit but to contribute to the fight against infectious diseases particularly corona virus and Lassa fever,” he said.He also appreciated the group for their relentless efforts in the production of machine.

The leader of the team, Mr Faisal Bala, said that the machine was an automatic spraying machine that can effectively spray entrants in and out of a room, adding that the ventilator has bags to provide oxygen to patients suffering from Corona virus attack.

Bala said that department would work in collaboration with the institution’s medical school for the actualisation of the project’s potentials.