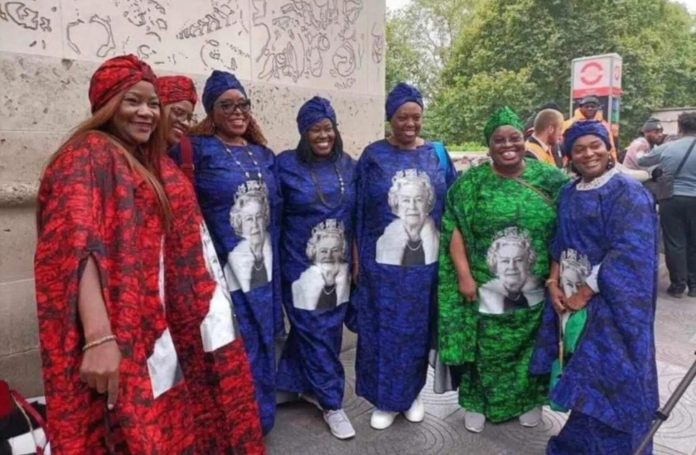 Nigerians in Disapora have gone the extra mile to celebrate the life of the late Queen of England, Queen Elizabeth.

“The Queen died peacefully at Balmoral this afternoon,” Buckingham Palace said in a statement”.

READ ALSO:  Tinubu: APC Must Do More Before 2023 Elections

Despite dying at the ripe age of 96, Queen Elizabeth II’s death came as a shock to many after an official statement was made public by Buckingham Palace

Following the sad news, photos of the late Queen flooded the internet with many sharing heartwarming tributes to mark the Monarch’s legacies.

The funeral was preceded by days of carefully choreographed public events, including a majestic procession from Buckingham Palace to Westminster Hall.

Countless admirers lined up for miles, waiting all day and night for a chance to file past the queen’s coffin during her four days of lying in state.

Following the state funeral service, the queen’s coffin was taken in a walking procession to Hyde Park.

It was then transferred to a state hearse for the drive to St. George’s Chapel at Windsor Castle, the queen’s final resting place, where her late husband Prince Philip and her sister Princess Margaret are also interred.

As the monarch buried the queen, many took to the street to mourn the Queen.

Nigerians in the diaspora were seen slaying in their Ankara cotton asoebis with the Queen’s face inscribed on it; their own unique way of paying tribute to the longest raining Monarch.

With her death, her eldest son Charles, 73, automatically became King of the United Kingdom and the head of state of 14 other realms, including Australia, Canada and New Zealand.