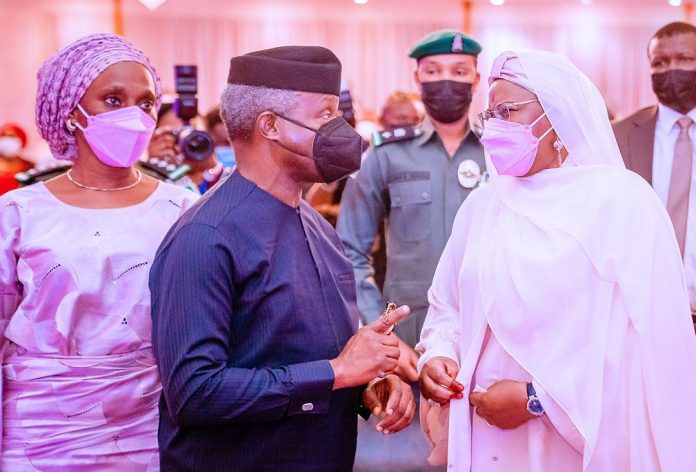 Vice President Yemi Osinbajo has said in the country’s history, no First Lady has captured Nigerians’ imagination as profoundly as Aisha Buhari.

Osinbajo stated this yesterday during the launch of a book titled: “Aisha Buhari: Being Different”, written by Hajo Sani, at the presidential villa, Abuja

According to him, while her views are sometimes controversial, she had established an ongoing conversation with the Nigerian people.

He said, “Dr. Hajo Sani has written a most engaging book on an incredibly fascinating person, Her Excellency Aisha Buhari, Nigeria’s First Lady. It’s unlikely that any First Lady in Nigeria’s history has, in such a few years, captured the imagination of Nigerians as profoundly as Aisha Buhari.

“She is, of course, the first First Lady to be on Twitter, on Instagram, and other social media platforms, getting her unfiltered views across to the Nigerian people and she’s probably the first to receive, in real time, the opinions of Nigerians on her views.

“The education of our children, prompt payment of pensions to army veterans, drug abuse, the violation and victimisation of women and every once in a while she airs her own personal struggles, her annoyance, in a manner, probably unprecedented in the role of the First Lady anywhere,” the vice president said.

The vice president stated that first ladies may quickly fade into obscurity, when the curtains of time are drawn on the tenure of the administration of their husbands.

According to him, the result is that the records and lessons of consequence that could benefit oncoming generations and enrich our understanding of history are regrettably lost.
“But it’s unlikely that Aisha Buhari would ever be forgotten and even if there was a chance of this happening, this well written attempt to document her life and times and her contributions as First Lady to national life, through the causes that she has promoted, removes that possibility,” he said.

On his part, chairman of the occasion, Asiwaju Bola Tinubu stated that with Aisha Buhari’s achievements, no one can reasonably question the role of a First Lady any longer.
Tinubu, who is also the national leader of the All Progressive Congress (APC), said Mrs Buahri’s effort also contributed to the president’s electoral victory in 2015.

He said, “Join me in congratulating the book’s author, Dr. Hajo Sani, for making this important contribution to our collective knowledge by highlighting the role the First Lady has played in our society.

“Given the First Lady’s achievements, no one can reasonably question the role of a First Lady any longer. Remember there were those who argued that the constitution does not assign an official role to the First Lady. Because Mrs. Aisha Buhari, their concerns have been forever laid to rest.

“The First Lady has played an uplifting, unifying role both in symbol and substance. She has been a voice of conscience calling us to be our better selves for the good of the nation and for the betterment of the weakest, most vulnerable among us.

“As such she has been a strong pillar of support not only to the president but also to the Nigerian people whom they both serve with such patriotic commitment and high purpose.
“Because of the humility of the presidential couple, Mrs. Aisha Buhari chose not to be addressed as ‘First Lady’ at the beginning of this administration. However, this could not be sustained. Neither her role nor her individual capabilities could be downplayed very long.
Tinubu said Aisha Buhari has truly shown herself to be the First Lady of Nigeria in title and also by virtue of her talent and temperament.

According to him “the role of First Lady provides critical support to the public functioning of the presidency. The author thus must be commended not just for documenting the background, education, career, family and public life of Mrs. Buhari in an enjoyable, easily readable manner but also in narrating the political and constitutional context within which Mrs. Buhari has moulded the position of the First Lady in Nigeria.

He said Aisha Buhari has a naturally strong connection with the average person because she speaks with sincerity and belief.

“We noticed this very early during the historic 2015 campaign. Thus, we convinced her to play a vocal and visible role in that groundbreaking campaign. Her efforts contributed to her husband’s success. She helped him make history during that campaign. Since coming to the office of the First Lady, she has not stopped making history.

“She has been an active and dedicated voice to those whom society sometimes forgets. She gives comfort to the broken and seeks relief for the destitute. No one can doubt her concern. And her care for the wellbeing of women, children and the powerless has established the standard for the office of the First Lady for years to come.

“Mrs. Buhari shows that a First Lady should not stand aloof and detached from what is happening in the country. Mrs. Buhari never shies from what she believes in. This makes her a reliable and true advisor to her beloved husband. No doubt that Mr. President’s administration has been enriched because of her active role and the teamwork that exists between husband and wife,” Tinubu said.

In his remarks, Ekiti State governor and chairman of the Nigerian Governors Forum (NGF), Kayode Fayemi, said If you are looking for the voice of the voiceless, defender of the defenceless, candour, courage, you have no place to go but the direction of the First Lady .
He said sometimes that candour may appear in the manner of indiscretion but it has endeared her to a majority of Nigerians.