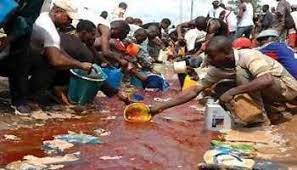 The product was allegedly stolen by some suspected vandals.

It was gathered that in an attempt to cart away the products, the suspected vandals bagged them in sacks via a swampy route in Abule Onilu area, of Lagos State, at about 7 am last Sunday.

However, the Command responded swiftly, to stop the vandals, through an emergency call.

NSCDC Lagos upon receiving the emergency signal, through the Command’s intelligence network, directed the Anti-vandal unit of the command, to respond swiftly against the activities of the vandals, in order to secure lives and property and avert oil explosion, in the area.

It was gathered that the Anti-vandal team thereafter enlightened the residents about the dangers, involved, in oil theft and pipeline vandalism and other notorious acts.

The team who evacuated the bagged product from the swampy route said that the effect of oil explosion is absolutely negative in residential areas and could lead to loss of lives and property.

The team enjoins Lagos residents to see security as a collective business and cooperate with the Nigeria Security and Civil Defence Corps, Lagos State Command, in the area of intelligence and information gathering, so that criminal activities will be completely eradicated, in the state.