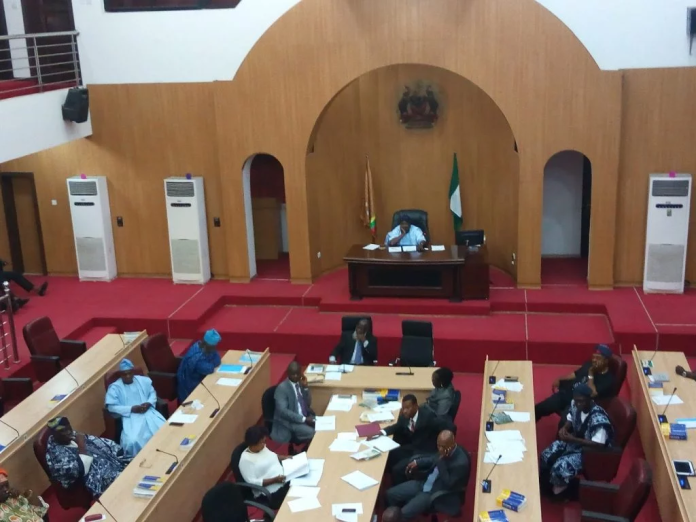 The Osun State House of Assembly, on Thursday, confirmed a request from Governor Adegboyega Oyetola for the reconfirmation and re-appointment of Commissioners and Special Advisers to fill vacant positions in the State Executive Council.

The Speaker of the Assembly, Timothy Owoeye at plenary read out the request from the State governor.

Governor Oyetola, while requesting for the confirmation and re-appointment of Commissioners and Special Advisers wrote that, “In line with the provisions of Section 192(2) of the Constitution of the Federal Republic of Nigeria 1999 as Amended, I hereby Present the under listed nominees for consideration and confirmation by the House of Assembly into the Position of Commissioners/Special Advisers in the state of Osun with a view to filling the vacant positions in the State Executive Council.”

The Assembly requested the Commissioners/Special Advisers designate to submit 35 copies of their resume to the House on or before Monday, June 27, 2022.

A 7-man Committee headed by the Deputy Speaker, Simeon Popoola was constituted by the House of Assembly to screen the nominees.

Briefing the Assembly on the letter requesting tenure extension for the local government caretaker committee members, Owoeye held that the request was in tandem with Section 3(A)(i) (ii) (III) of the Osun State Local Government Administration and Amendment 7 Law,(2021).

The request letter read in part, “This is to bring to your notice that the 6 months term of the Caretaker Management Committee in the local government councils, local government development area councils will expire on the 12th of July, 2022.

“I hereby request the distinguished State House of Assembly, Osun State to confirm the appointment of the Caretaker Management to run the affairs of the Councils for another period of 6 months.”

The Speaker, while commending the Governor, stressed that local government being the closest tier of Government to the people, there was the need to prevent a vacuum.

While harping on the level of insecurity across the country, Owoeye noted that it was expedient to have a structured government at the local government level.