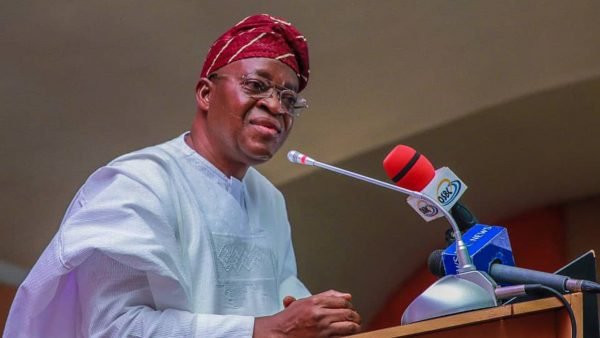 The Osun State Governor Adegboyega Oyetola has distanced the state dissociated the state from the call for the Yoruba nation in the South-West.

Also, the state government through the Ministry of Education suspended the principals of the three schools who allowed a group into their school premises to speak with the students on Yoruba nation.

Reacting to a viral video that showed the group talking to the students about the plan of the Yoruba nation to secede from Nigeria, Osun Commissioner for Education, Folorunsho Bamisayemi, said “Oyetola was not aware and never gave consent to the group to speak with public school students in the state”.

He said, “Nigeria is one entity and will continue to remain so. The State Government of Osun never gave consent to any group to speak with students of public schools on a matter we know can cause disunity and chaos in the country.

“As a Nigerian state, we believe in the Nigerian dream. We urge every Nigerian to pray and work for Nigeria not to break up. As for those principals that allowed such a group into the premises of our schools, they will face the consequences of their actions.”

How to survive Detty December in Lagos

Wearing socks during sex can give you more intense orgasms, here’s how