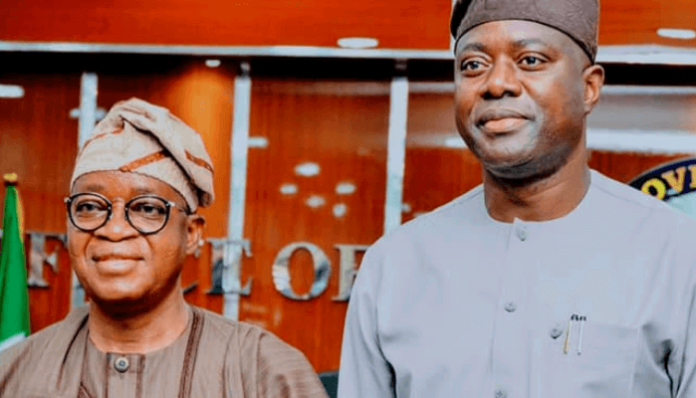 Osun State Governor, Gboyega Oyetola and his Oyo counterpart, Seyi Makinde, on Thursday, flagged off the total reconstruction of the 91km Osogbo-Iwo-Ibadan road that has been in deplorable condition for years.

The governments of Osun and Oyo had recently jointly awarded the reconstruction of the road to put a permanent end to the untold hardship faced by motorists and other road users.

This is even as Oyetola declared that by the special Grace of God he would be the one to commission the project when completed. The road project is expected to be completed within 18 months.

The road, which is said to be of economic importance to both states, links Ibadan, the Oyo State capital and Osogbo, the Osun State capital via different towns and villages, including the ancient town of Iwo.

The road, which commences at the rotary intersections connecting it with the Lagos-Ibadan on Ibadan-Iwo-Osogbo and Ibadan-Oyo Highways, was inherited by the two states at the creation of Osun from old Oyo State in the year 1991.

The Osogbo-Iwo section had hitherto been in a bad state, wasting man-hours and constituting huge socio-economic malaise to the two states, especially given its status as the shortest route to Ibadan.

Many observers have lauded the decision of Governors Oyetola and Makinde to work together to fix the road, notwithstanding their political affiliations, describing it as an encouraging development and a clear resolve to separate politics from governance.

Speaking at the flag-off ceremony in Osogbo, Governor Oyetola, said his administration considered the road project as of utmost importance, noting that the award of the reconstruction of the road further demonstrates his government’s commitment to the infrastructural development of the State and well-being of the citizenry.

He added that the flag-off of the road project represents another fulfilment of his electioneering promise to the citizens of Osun particularly Iwo people.

Oyetola disclosed that the road contract was awarded through the e-procurement process as contractors who had shown capacity to deliver within specifications were allowed to bid for the contract.

According to him, the award of the Osun section of the road contract, measuring about 55km was done through a transparent bidding process which saw Messrs Peculiar Ultimate Concerns Limited, having polled the highest number of points, awarded the contract at the sum of N11,309,932,939.00.

He stated further that the reconstruction of the Osun section of the road will be completed within 18 months as it is equally expected to be executed under two main segments.

“The Dele Yes Sir Roundabout and the islands shall be adorned with a spectacular landscape that will bring out the beauty of Osogbo as the capital city of Osun and the home of culture.

“The second segment which shall begin from the Sawmill (Ido Osun) and end at the Oyo State Boundary, with a total length of 52.6km, shall be of Single Carriageway with a width of 7.3m and 1.5m width hard shoulder. This leg of the road shall also make provision for adequate hydraulic structures with thorough treatment of the problematic sections by the provision of filter bed, removal of unsuitable materials, and improvement of the vertical alignment of the road.

“In general, the road, which has the best alignment in the entire South-West shall be completely overlaid after all the necessary problematic sections had been treated.

“This road project will no doubt further boost the socioeconomic activities of our dear State, especially because it is an addition to the massive road networks our administration had unleashed on the State. It is our hope that the immediate benefitting towns and other parts of the State will take advantage of the road for personal economic gains,” Oyetola added.

In his remarks, Governor Seyi Makinde of Oyo described the project as a revolution aimed at strengthening the bond of unity and cohesion between Oyo and Osun states.

Makinde disclosed that N12.5billion will be expended to reconstruct the section of the road belonging to the State, saying that with what Osun will spend, the two states would spend a total of N24billion on the project.