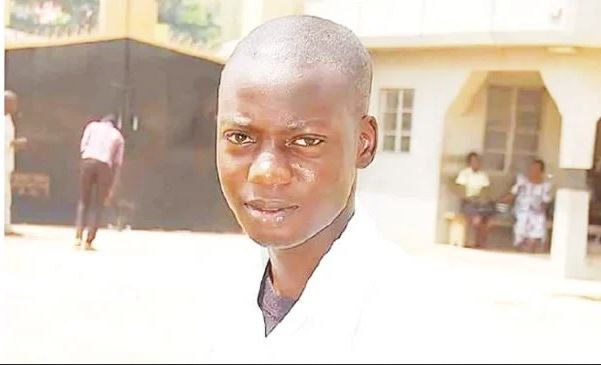 According to The PUNCH, serious controversy is currently trailing the sudden death of Ayo Adekunle Ajala, a PhD student at the Department of Crop Science, Kebbi State University of Science and Technology, Aliero.

While investigation to unravel the cause of his death is ongoing, a post on social media two days after his demise, read, “This young boy, Ayo Ajala, a PhD student, hanged (sic) himself to death at KSUSTA PG hostel. The cause of his suicide is yet to be uncovered.”

A photograph emerged showing the deceased’s lifeless body in a squatting position, hung with a rope to the hanger rack in his wardrobe. There also emerged another picture of blood stains covered with sand on the floor of the room.

The family of the deceased, however, faulted the suicide theory, describing it as baseless and outright falsehood. Instead, it alleged that Ayo was murdered.

His distraught father, Mr Ayodeji Ajala, told our correspondent, “Ayo left home in Sokoto last week Tuesday for school at Aliero, Kebbi State, and the elder sister told us that he communicated with her in the evening that he got to school safely.

“The following day, we made repeated calls to him; I decided to travel to Aliero on Thursday to check on him as it was very unusual for him not to take his calls or call back.

“On getting to the school in company with his younger brother, we noticed that people gathered in front of the hostel. When I got there, I was given a chair to sit on and some lecturers were already seated. They broke the sad news to me and their narration was that when they opened Ayo’s room that Thursday, they saw his lifeless body.

“I was then asked if I would like to see his corpse, but I politely declined. His younger brother was inconsolable. I was then taken to an office, from where I contacted my son-in-law, who later joined us from Sokoto.

“The school never mentioned anything about suicide when they broke the news of his death to me. The officials only said his body was found in his room and the police were already investigating his death. They also asked if I wanted his remains to be buried in Aliero and I insisted that he should be taken to Sokoto.

“My son had no reason to and could not have contemplated such a cruel and ungodly act as suicide. He was a well brought up, God-fearing, obedient and well-behaved child. As I am talking to you, the police have yet to contact us. So, how did the theory of suicide come in?”

Ayo had his first degree at the Usmanu Danfodiyo University, Sokoto, completed his Master’s degree at the Kebbi State University of Science and Technology, where he returned to for his PhD.

The deceased’s brother-in-law, Pastor Ola Mustapha, said he was shown a rope, which the school authority claimed was removed from his neck.

He explained, “On getting to the campus, I requested to see his corpse, but I was told that it had been evacuated to the hospital and I headed straight for the hospital, where I demanded to see the body, which they obliged. On my request, they took me to his room, where he was the sole occupant, but the room was under lock and key.

“When I peeped into the room through the window, I noticed plenty sand and upon enquiry, I was told that the sand was poured on blood stains on the floor.

“This sudden twist has added more grieve to the family. We are bombarded with numerous calls from those trying to find out the true position. However, we are holding our peace in honour of the departed, but anxiously waiting for the outcome of the investigation.”

A police source told PUNCH correspondent that the sum of N291,000 was found in the deceased’s room, while his two phones and a laptop were taken away by the police.

As of the time of filing this story, no official statement had come from the university’s management over Ayo’s death.