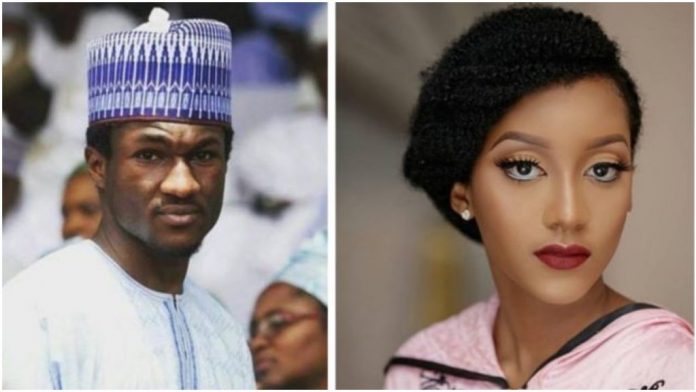 On Sunday, some governors and ministers with other top political officials stormed the palace of the Emir of Kano to formalize plans for the wedding of Yusuf Buhari, son of President Muhammadu Buhari.

Frank Talk Now reports that the president’s only son is getting married to a 19-year-old graduate of Brighton University, UK and daughter of the Emir of Bichi., Zara Nasir Ado Bayero.

The Bride-to-be’s father is the fourth child of the late Emir of Kano, Alhaji Ado Bayero.

Her father, aside being an Emir, is also the Chairman of 9mobile. He was the first child born at the official residence of Kano Emirate known as Gidan Dabo.

He was the district head of Fagge, Tarauni and Nassarawa Local Government Areas before he was appointed a first-class monarch by the administration of Governor Abdullahi Ganduje.

The delegation to the palace was led by the Jigawa State Governor, Abubakar Badaru of Jigawa.

They were hosted by the current Emir of Kano who is the older brother of the prospective bride’s father, Emir of Bichi.

According to reports, the wedding is expected to be held between August and September this year.

Facebook
Twitter
WhatsApp
Linkedin
Telegram
Previous articleAlleged murder: Chidinma Ojukwu recounts how she met Super TV CEO, Uwaifo Ataga at a wild party
Next articleGuys Woo Me Just Because They Want To Have A Feel Of My Big Boobs – Ada La Pinky