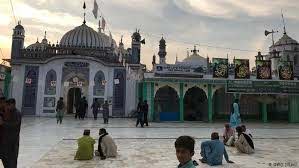 A professor of Sindhi literature in Pakistan, Sajid Soomro,  has been arrested  on charges of blasphemy, a serious charge in Pakistan that can lead to the death penalty if proven.

“Why are you arresting me? I am a professor. I am a Muslim and I have not committed any blasphemy; this is injustice, this is grave injustice,” Soomro reportedly pleaded. But he was ordered to “get inside the van” and driven away to Khairpur city police station in Sindh province where he was put behind bars on 10 June.

Considered by many to be a broad-minded person, Soomro, a professor of Sindhi literature at Pakistan’s Shah Abdul Latif University of Khairpur was arrested on a complaint by Ghulam Nabi, a police officer who accused him of having spoken against Islam and against religious seminaries in the country.

Widespread criticism by the academic community followed his arrest, but a case was registered against him and Soomro was remanded in court custody on  June 13. His bail plea was accepted on 16 June with the case going to the court under the blasphemy clauses of the Pakistan Penal Code.

The blasphemy law has been severely criticised by civil society, academics and lawyers as being against freedom of speech and academic freedom and misused to settle personal scores.

“Professor Soomro has been speaking in favour of open-mindedness and has been advocating equal rights for both men and women. We never heard him speaking against Islam, nor have his students ever complained against him,” Imdad Hussain, a professor at Shah Abdul Latif University told University World News.

A professor of chemistry at the University of Sindh in Jamshoro and a noted rights activist, Arfana Mallah,  told University World News: “Arresting Sajid Soomro on blasphemy charges while there is no such evidence against him is a clear misuse of this law to suppress academic freedom. The complainant himself has stated that an informant has told him that the professor was speaking against Islam.”

Mallah herself is facing murder threats and accusations of blasphemy after she openly spoke against Soomro’s arrest and called for an end to the misuse of the blasphemy law.

“I have received threats from a religious group for condemning the unjust arrest of an elderly respectable professor who has said nothing wrong and they now want a case against me under the same law because I oppose this law,” she said.

After Soomro’s arrest, the Human Rights Commission of Pakistan, an independent organisation, defended Mallah’s right to express dismay over the registration of a blasphemy case against a fellow professor.

READ ALSO: Top 10 universities in terms of admission in Nigeria

“The state must ensure the safety of its citizens and prohibit the misuse of the blasphemy and sedition laws to silence independent voices or settle personal scores,” the rights organisation said.

Rasheed Khalid, former dean of social sciences at Islamabad’s Quaid-i-Azam University, told University World News: “Arresting a respectable professor by over two dozen policemen raiding his home without any solid evidence and under shady charges of blasphemy is unacceptable to the academic community and we also condemn the hounding of professor Arfana Mallah by radical Islamists.”