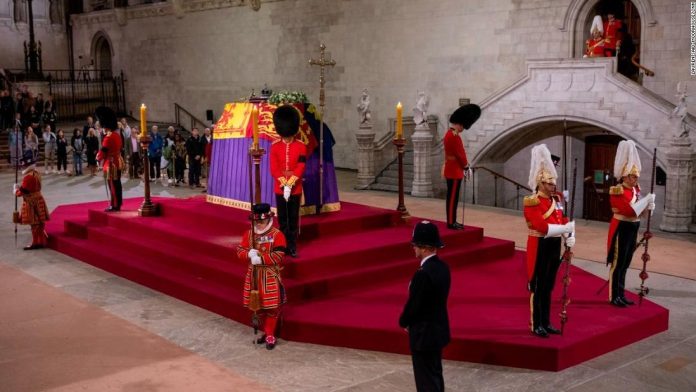 Queen Elizabeth II’s coffin has been lowered into the Royal Vault at St. George’s Chapel following a committal service. A private burial service will be held for the family later Monday.
Her state funeral took place earlier this morning in London, where her son and heir King Charles III was joined by the rest of the royal family and leaders from across the world for the service. Read the Order of Service.
The Queen — Britain’s longest-reigning monarch whose rule spanned seven decades — died on Sept. 8 at the age of 96, prompting an outpouring of grief across the UK and around the world.
The body of Queen Elizabeth II has been buried at the King George VI Memorial Chapel in Windsor on Monday evening local time, according to the official website of the royal family.

The Queen was buried together with her late husband, Prince Philip, after a private burial service attended by King Charles III and other members of the royal family.
Prince Philip’s coffin was relocated today from the Royal Vault of St George’s Chapel in Windsor, so that the Queen can be laid to rest alongside her beloved husband of 73 years.
The burial service was conducted by the Dean of Windsor.