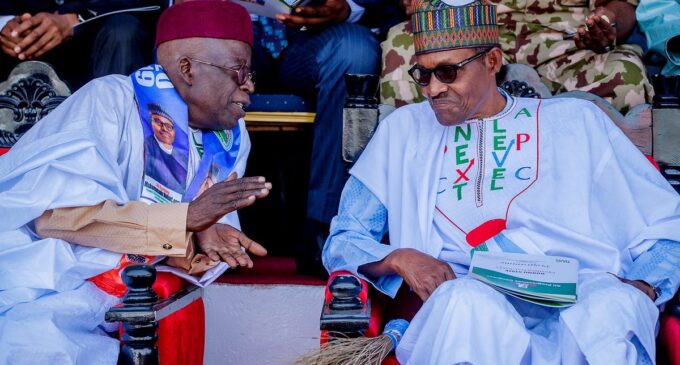 The national leader of the ruling All Progressives Congress (APC), Sen. Bola Ahmed Tinubu, has said the executive and legislature must work together and release the money to address poverty and unemployment in Nigeria.

Tinubu, a former governor of Lagos State, also urged President Muhammadu Buhari and the National Assembly to immediately put a stop to austerity measures and introduce stimulus expenditure to fast track the economy.

He stated this in Kano on Monday at the 12th colloquium to mark his 69th birthday, where he also said Nigerian leaders must fine-tune their economic programmes to favour the poor.

The Asiwaju of Lagos equally advised the federal government to employ 50 million youths in the security sector to address various breaches afflicting the country.

The colloquium was themed ‘Our Common Bond, Our Common Wealth: The Imperative of National Cohesion for Growth and Prosperity’.

President Buhari, who participated in the event virtually, said Nigeria will be stronger if it remained one.

Osinbajo was billed to be personally present in Kano for the event but had to participate virtually from Abuja because of bad weather which did not allow planes to land at the Malam Aminu Kano International Airport.

The President of Liberia, George Weah, joined the programme via Zoom.

Most of those who spoke at the event, including VP Osinbajo and Governors Abdullahi Ganduje of Kano, and his Lagos State counterpart, Babajide Sanwo-Olu, the National Chairman of APC and Yobe State Governor Mai Mala Buni, made their remarks in line with the theme of the colloquium, saying the unity of Nigeria was sacrosanct.

But some opposition elements said the Kano meeting was not about making Nigeria better, but a get-together of politicians desperate to remain in power beyond 2023.

In his speech at the event, Tinubu said President Buhari must shift his preference from emphasis on austerity measures to releasing money that would reach the poor.

He cited the example of the recent stimulus package by the US government while taking a dig at Nigeria’s increasing unemployment rate under the present administration.

“Your own employment rate is 33% and you ask us to keep on fasting. The one we are fasting spiritually is voluntary. We have been fasting for so many years. I hope the National Assembly, I hope the president himself will not pay attention to austerity. It is only the state that must constrain itself and balance the budget,” Tinubu said.

He added that sovereignty is that of Nigeria and it is only the federal government that has the sovereign power and must use it to improve the quality of life of Nigerians.

Tinubu also called on the government to employ more youths in the security sector.

“Surprisingly, when you see the social media today, you see the minds of our youths. They are angry, but we appeal to them that we will listen to them.

“We are under-policed and we are competing with armed robbers and bandits to recruit from the youths who are unemployed. Recruit 50 million youths into the army and take away from their recruitment source. What they will eat, cassava, corn, will grow here.

“Don’t talk about illiteracy, anybody who can hold a gun, who can handle a gun, who can cock and shoot is technically competent to repair a tractor in the farm,” he said.

Justifying why they went to Kano for the colloquium, Tinubu said it was to “demonstrate to Nigerians at this critical time.”

According to him, “It is because there is a Fulani man, a herder, who gave his daughter to a farmer, a Yoruba man. Some people are agitating wrongly. Ganduje and I represent this peaceful cohesion to Nigeria, end of story.”

He also hailed Ganduje for the developmental projects going on in Kano State.

“Ganduje has been up working – sleepless. He nearly worked me to death and I almost regretted coming … Project this, project that. If you see me dozing earlier, it was because I only slept around 4 am. We have been going on different projects tour. Kano, you are lucky.