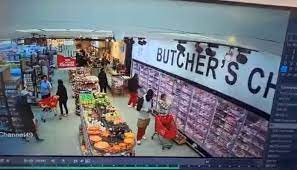 A baby was snatched by a shop attendant after her mother turned her back on the eight-month-old for just ten seconds while selecting food at a South African supermarket.

Mother-of-two Daniella Wolff had placed her daughter in the child seat of her shopping as she selected items from the chilled meat fridges at her local SuperSpar store in the city of Alberton, near Johannesburg.

But as she turned her back to open the glass door and bent down to pick up the meat, a shop employee calmly walked over and snatched her baby from the shopping trolley.

CCTV shows the butchery assistant lifting the baby out of the trolley and walking away with the youngster in his arms.

Wolff, of Alberton, is seen turning around to put the food in the trolley but is horrified to find her eight-month-old daughter missing.

As Wolff shouts out in horror, she quickly turns around and sees her daughter being carried away by the store employee who was trying to walk out of site behind a grocery aisle.

Wolff ran up to the employee and grabbed her baby from him while shouting: ‘Where were you taking her? What were you going to do with her?’

The shaken mother posted the CCTV from the SuperSpar security office on her Facebook and gave her own account of what happened.

She said: ‘I have her in my arms and when I get to the meat section I place her in the trolley to free my hands and when I find what I’m looking for I bend down.

‘Within an instant, a stranger is seen in the video taking my daughter.I look up and she’s gone. I immediately look for her and find her in the arms of this man.

‘I’m able to grab her from him and say what he is doing with my daughter? Why does he have her? He is smiling and laughing and I say it isn’t a joke and it’s not amusing.

‘He tells me he walked past the trolley and my daughter’s arms were up so he picked her up. I am frozen and confused. Why is he laughing? I tell him it’s not funny.

‘You don’t touch a child, you don’t take a child. I am unsure what to do next and the man again approaches me to ‘demonstrate’ what my daughter was doing.

‘He said she wanted to go with him and I am so angry, shocked, hysterical and I’m shouting “Where were you taking her? What were you going to do with her?”‘

Wolff called her husband Bradley who rushed to the SuperSpar and after reviewing the CCTV footage insisted on reporting a case of attempted baby snatching.

The South African Police Service was called and after seeing the video arrested the member of staff.

A spokesman for SuperSpar said: ‘We have provided the CCTV footage to the police and management are fully co-operating with the authorities in their investigation.

‘We are extremely relieved a reported case of baby snatching was foiled on Sunday and we can confirm we immediately decided to suspend one member of staff.

‘We will take further action based on the results of the ongoing investigation and the SPAR group is reaching out to the family to offer any help they need including counselling.

‘The SPAR group adopts a zero-tolerance approach to crime and will ensure the strongest possible consequences to those who commit crimes in our stores to ensure customer safety’.

South African Police warrant officer Gerhad Cornellius confirmed a case of attempted baby-snatching was under investigation and it was too early to comment further.