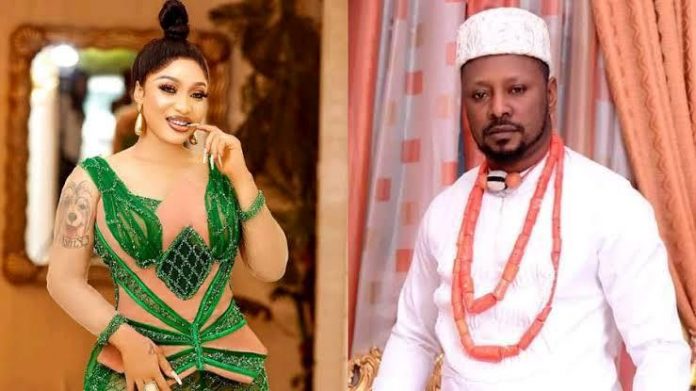 Controversial Nollywood star, Tonto Dikeh, and her ex-lover, Prince Kpokpogri, have continued to make news headlines since they officially parted ways in July.

Mr Kpokpogri, who is also the chairman of the Anti-Corruption and Integrity Forum, described his ex-lover as “Helen of Troy” and claimed their short-lived affair was tumultuous.

“We dated for barely three months and it was more or less a living hell! So much has happened in such little time that I overlooked it for the sake of the so-called relationship and my sanity,’’ Kpokpogri said while reacting to the news of their break-up.

Kpokpogri was thrust into the limelight after Ms. Dikeh unveiled him on the occasion of his birthday on 27 June on her official Instagram page. The once happy relationship crashed after a viral voice note and a phone call between Kpokpogri and a socialite was leaked online by a notorious Instagram gossip blogger. Ever since the once admirable couple have been locked in a war of words on Instagram.

In a petition against Kpokpogri dated 6 September and addressed to the Commissioner of Police, FCT Command, Dikeh through her counsels in Festus Keyamo Chambers, Okechukwu Uju-Azorji, and Arinze Egbo made several shocking revelations.

In the petition which was seen by this PREMIUM TIMES, the actress accused her ex-lover of being a fake lover. She said Kpokpogri carefully planned his entry into her life.

They said, ‘‘That sometime in June 2021 one Prince Kpokpogri Joseph started to court our client with a proposal to marry her. In the process, he would invite our client to his residence, and sometimes he came over to our client’s residence. Unknown to our client, the said Joseph Kpokpogri (who our client later discovered to be a serial blackmailer) had other motives for courting our client’’.

She accused him of being a hardened blackmailer. In the petition, Dikeh alleged that he blackmailed her and “stage-managed” their relationship for personal gains.

ALSO READ:  How Obasanjo Forced Lagos To Think Like Country Under Tinubu – Osinbajo

‘‘Our client now has reason and evidence to believe that Joseph Kpokpogri had planted closed circuit Television Cameras (CCTV cameras) at private areas of his residence, and had stage-managed those visits with the aim of blackmailing her client. She was surprised when sometime in August 2021, the suspect started demanding money from her and threatening to expose nude pictures and other such documents relating to her to actualize his demands’’.

They said, ‘‘The said Kpokpogri also obtained the sum of N8m under false pretenses, however, he has paid back the sum of N6m but has refused, failed, and/or neglected to pay the sum of N2m outstanding.

She also accused him of planting closed-circuit television cameras (CCTV cameras) at private areas of his residence and had stage-managed those visits to blackmail her.

They said, ‘‘Our client believes that some of that information was obtained by wire-tapping her phone and/or through such other means without her authorisation’’.

They added that Kpokpogri started sending messages, documents, and files containing sensitive information and materials relating to Dikeh to her phone while also releasing some to the public.

Dikeh added that she was threatened not to speak badly about the politician. She said, “that if she writes anything against the said Kpokpogri, they will kill her; that they know where her son is schooling and every other detail about her.”

Dikeh alleged that Kpokpogri took possession of her Toyota Hilux van 2021 and has refused to return it despite several demands. Her lawyers said the Hilux van (2021 Model) was bought in Dikeh’s name.

Not one to keep quiet in the face of these allegations, Kpokpogri took a swipe at his ex-lover. In a recent Instagram Live session, he said, ‘‘You rubbished the first man you married, you think you can play the same game with me”,

He then accused her of taking his Lexus after they broke up and refused to return it.

In the thick of their blossoming romance, Dikeh’s fans pleaded with her to take their affair off Instagram and celebrate each other privately.

Their pleas fell on deaf ears as Dikeh took the open display of affection on Instagram a notch higher.

In no time, their ‘enemies’ and gossip blogs went digging for dirt and in no time, they unearthed a leaked voice call which insiders say finally ended the once-promising relationship.