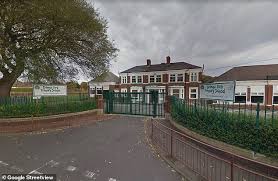 A star primary school head teacher has been  suspended for claiming that some teachers  ‘sat at home doing nothing’ during lockdown in an interview about the wider reopening of schools across the UK.

Pauline Wood, from Grange Park in Sunderland, according to Daily Mail online  is being investigated for allegedly bringing her school into ‘disrepute’ during an interview on local BBC radio in which she blasted some teachers for not pulling their weight and praised others for coming up with ‘imaginative’ ways to educate during lockdown.

Mrs Wood is due to leave the school in September but is worried that her success there will now be marred.

READ ALSO: Nigeria tops African countries with foreign students in the US

However, others rallied to the head’s defence and praised her ‘refreshing honesty’. One Twitter user wrote: ‘I think Pauline Wood deserves a pat on the back for being honest. I work with teachers every day and I can guarantee some really are lazy. Some have not worked 10 hours a week let alone flat out.’

It came as education unions continued to face accusations that they were sabotaging efforts to get children back to school, with the National Education Union (NEU) insisting that Boris Johnson’s ‘one metre plus’ rule will still make teaching difficult.

School closures are overwhelmingly impacting disadvantaged children, with a recent survey revealing two million children in the UK had done barely any schoolwork at home during the coronavirus lockdown.

Around one in five pupils have carried out no schoolwork, or less than an hour a day, since schools closed partially in March. Meanwhile, only 17 per cent of children put in more than four hours a day.

Other figures revealed that nearly a third (31 per cent) of private schools provided four or more online lessons daily, compared with just six per cent of state schools.

Meanwhile parents who are left in the dark about the future of their children’s education have to look after them at home, meaning they cannot get back to work and help kick start the UK economy.

Mrs Wood, who spearheaded Grange Park Primary School’s ascent up the Ofsted grading system from ‘inadequate’ to ‘outstanding’, praised some teachers for coming with ‘imaginative things’ during lockdown.

She read out texts on BBC Radio Newcastle from parents concerned about the level of support schools have been offering children, and remarked: “Some teachers are coming up with the most imaginative, amazing things and other people do sit at home doing nothing. I won’t defend those people.”

When asked to comment further, though, she said: ‘Some teachers have been in (schools), but many have not been in at any time. Safety is paramount, but don’t make out teachers have all been working flat out.’

She added: ‘I think it’s time we talked about the elephant in the room.’

Though the BBC interviewer praised Mrs Wood for her ‘very refreshing’ honesty, the school’s governors suspended her after  a complaint that she made ‘potentially disparaging comments’ about her staff.

After she was suspended, she told Schools Week: ‘It is very concerning that a head teacher can be suspended for giving a truthful answer to questions posed by members of the public.’

She has since tweeted: ‘As Head teachers, our job descriptions say we should hold staff to account.’

People took to Twitter to praise Mrs Wood’s ‘refreshing honesty’, with one account posting: ‘Pauline Wood head teacher from grange park tells the truth about lazy teachers doing nothing during lockdown and gets suspended’.

Another social media user commented: ‘I think Pauline Wood deserves a pat on the back for being honest. I work with teachers every day and I can guarantee some really are lazy.

‘Some have not worked 10 hours a week let alone flat out.’

Mrs Wood has been at Grange Park for 15 years and has been repeatedly praised in Ofsted reports for her ‘relentless’ pursuit of ‘excellence’. She was credited with overseeing an extremely positive impact on pupils’ outcomes’ and saw the school shortlisted for a prestigious TES award in 2012.

The head teacher said she did not know who had nominated the school for the award, but said she was thrilled.