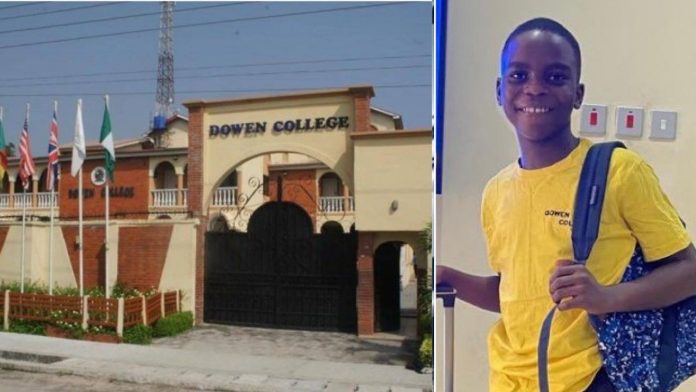 The death of a 12-year-old student of Dowen College in Lagos, Sylvester Oromoni Jnr, has sparked agitations from Nigerian celebrities, as they demand justice for the child.

Reports had emerged that Oromoni was bullied and beaten by fellow students. The supposed injuries from the beating led to his death, according to a Twitter user with the handle @perrisonoromoni, who claimed to be the boy’s cousin.

However, in a statement on Wednesday, the school denied all allegations stating that Oromoni was neither bullied nor beaten but only complained of hip pain after playing football.

Contrary to the school’s statement, the victim’s cousin rolled out photos and video evidence, which tended to corroborate the fact that the child was bullied and beaten; an activity that could have led to his death.

Meanwhile, the Lagos State Government has ordered the indefinite closure of the school, pending the outcome of an investigation into the student’s death.

Following the closure, Nollywood star, Kanayo O. Kanayo, has told the Lagos State Governor, Babajide Sanwo-Olu, that shutting down the school is not enough.

The actor made this call in a video on his Instagram page which he captioned, “Dowen college must pay for this #justiceforsylvester.”

In the video, he said, “The Governor of Lagos State, our own dear Babajide Sanwo-Olu. After the EndSARS protest and report, you have another challenge on your hands.

“The case of the 12-year-old Sylvester – your son – cannot be swept under the carpet. It is not enough to shut down the school.