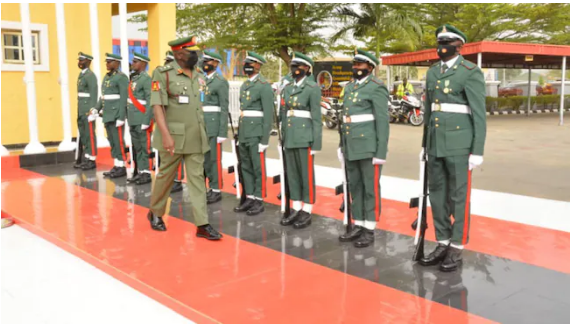 The Nigerian Army has buried 11 soldiers killed by a militia group in the Konshisha local government area of Benue state.

Daily Trust reported that bereaved family members, colleagues, and senior officers of the 72 Battalion attended the ceremony at a military cemetery at Wurukum in Makurdi, the state capital.

He condemned the killing of the soldiers and promised to corporate with the military to ensure the arrest and prosecution of those involved in the killing.

LFrank Talk Now recalls that the Nigerian Army disclosed that not less than 11 military officers attached to Operation Whirl Stroke were killed in an unprovoked attack by strange gunmen in Benue state.

According to the force on its Facebook page on Friday, April 9, an officer, and 10 soldiers were on a routine operational task in the area when they were attacked.

A spokesman, for the army, Brigadier General Mohammed Yerima, said troops have been ordered to go after the attackers and bring them to face justice.

Meanwhile, the Defence Headquarters (DHQ) has dismissed reports linking troops to alleged killings of some innocent residents in the Konshisha area of Benue state.

The dismissal by the DHQ was in reaction to reports that troops avenging the deaths of 11 soldiers, killed dozens of people in the state, The Cable reported.