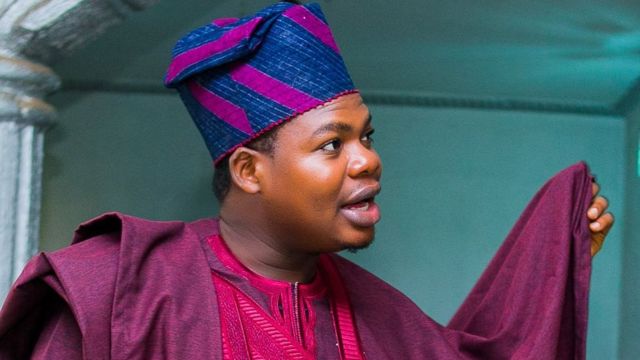 In a recent post on his verified Instagram page, Mr Macaroni revealed that he attended four different universities in Nigeria in a bid to obtain a degree which made some people think he had a spiritual problem.

The comedian expressed gratitude to his parents who stood by him through those years even though people told them he had spiritual issues. Macaroni went on to pray that parents reap the fruits of their labour and sacrifice.

He wrote: “I went to four different Universities. And all through those years, my parents stood by me. Even when some people were telling them that I had spiritual problems.

“May all our parents reap the fruits of their labour and sacrifice. Amen.”

Mr Macaroni made news headlines in early 2021 following his arrest by men of the Nigeria Police Force during the #OccupyLekkiTollGate protest.

Frank Talk Now recalls that the comedian was arrested alongside 39 other protesters clamouring for a better livelihood and demanding justice for people killed by the now-disbanded SARS division of the Nigeria Police Force.

In another news, the daughter of a billionaire and musician, DJ Cuppy and former Big Brother Naija housemate, Kiddwaya have clashed in a trending video.

Frank Talk Now reports that the ‘fight’ started after Kiddwaya, during a conversation told Florence Otedola (Cuppy’s birthname) to drop aside her billionaire attitude so that she could get a man to stay by her.

Facebook
Twitter
WhatsApp
Linkedin
Telegram
Previous articleUNIPORT bans “pleasure swimming” as undergraduate dies in pool
Next articleBandit Terrorists Are Nigerians, We Are Ready To Reintegrate Them Back Into The Society – FG