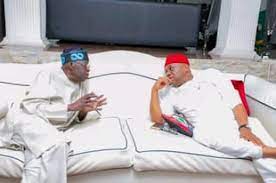 The National Leader of the All Progressives Congress, Bola Tinubu, on Saturday met with the former governor of Abia State, Orji Uzor Kalu, in  Abuja.

Both are believed to be eyeing the APC ticket for the 2023 presidential election.

The ex-Lagos State governor arrived at Kalu’s home at 4:25 p.m. and immediately went into a closed-door meeting with his host.

Although issues discussed at the meeting were not made public, sources close to the two ex-governors said they spoke on major national issues, including politics, economy, and insecurity.

The APC is expected to hold its national convention before the end of the year as the clamour for the Chairman of the APC National Caretaker and Extraordinary Convention Planning Committee, Mai Mala Buni’s removal heightened.