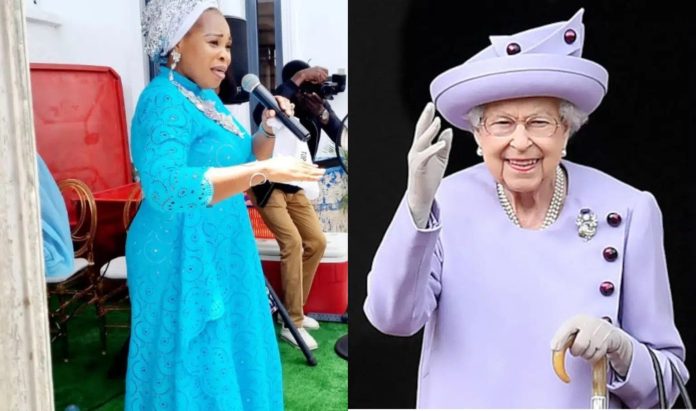 Gospel singer, Tope Alabi is presently mocked and criticized online for releasing a tribute song in honor of the late Queen Elizabeth who died on Thursday, September 8, 2022.

“The Queen died peacefully at Balmoral” Buckingham Palace said in a statement.

With this latest development, her eldest son Charles, 73, automatically becomes king of the United Kingdom and the head of state of 14 other realms including Australia, Canada, and New Zealand.

READ ALSO:  I did not speak with any journalist on Tinubu/Shettima ticket -Awolowo-Dosumu

In a bid to pay tribute to her, Gospel singer Tope Alabi released a video of collated photos of the Queen with a composed song in her honor, an act that many of her followers didn’t appreciate.

“When I heard the news I was shocked and sad, though it’s better on the other side, I know it is peaceful on the other side, but we are pained you had to leave us this soon. We don’t want you to leave, we didn’t plan to pay tributes to pay this soon, you love everyone and you are so kind” the lyrics of the tribute song reads in part.

“Which kind oversabi song be this for crying out loud, no single British artist don sing her tribute, do u even know ur history? Na wa oh” one Mr Cross wrote.

“I find this hilarious and stupid. You don’t want her to leave, at 96? Please which tribute did you release for the Alaafin of Oyo when he died or even Ada Amaeh the actress, it is Queen Elizabeth you are doing eye service for” one Aanma wrote

“When I first saw this I thought maybe people might have edited it and put your song, but aunty Tope you fell my hand for this one! You are shocked at a 96year old woman dying? wow ” one Amina wrote

“It is as if Queen Elizabeth is from Nigeria cause the way my people dey post the woman ehnn. Oju aye ti ba ti bati gbogbo yin je some people never reach the airport before talkless of going to the woman country iku baba yeye death no cast like this mtchweee ao fe ko lo for person wey her generation No understand Yoruba ewo eleyi tilor” One Damilola wrote

One Abraham wrote “This is exactly why we were enslaved and we haven’t still learned yet. Imagine idolizing your oppressor”

One Kazeem wrote “You should minister this at the funeral you know?? Kindly lemme know when you are doing ds..”