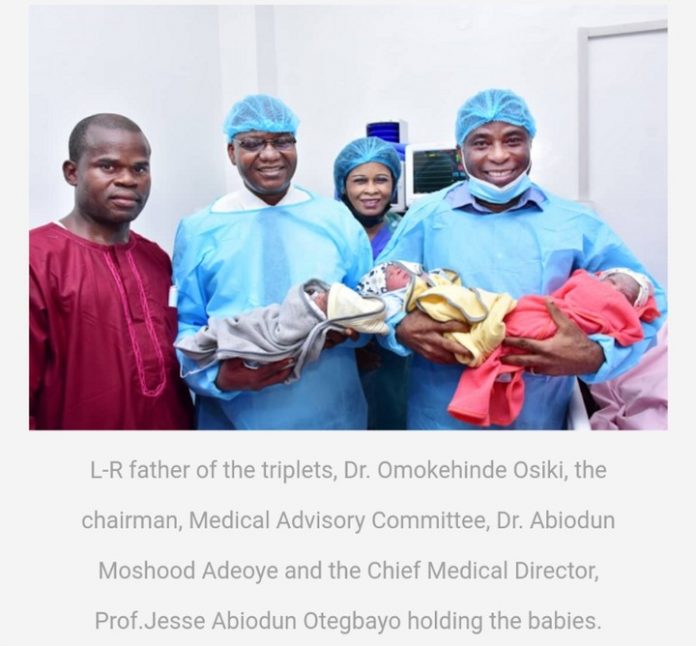 The University College Hospital (UCH) Ibadan took delivery of triplets of the first In Vitro Fertilization carried out in the hospital.

The 45-minute procedure for the delivery commenced at about 1pm.

The mother and the babies – all females – are in good condition, according to the hospital authorities.

The elated father, Dr. Kehinde Osiki of the Department of History and Strategic Studies at the University of Lagos, was on ground to witness the delivery of the babies.

Osiki couldn’t hide his joy at the arrival of the babies.

He pointed out technology has brought relief to problems often attributed to spirituality, saying instead of people carrying the burden of superstition, they should seek scientific solutions to their problems.

He encouraged couples who could not fertilise not to lose hope, stressing that solutions abound for all problems.

The mother of the triplets is a member of staff of the Forestry Research Institute of Nigeria (FRIN), Ibadan.

While expressing delight over the delivery, the UCH Chief Medical Director (CMD), Prof. Jesse Otegbayo, described it as another success story for the hospital.

Otegbayo pointed out the commitment to take UCH to an enviable level had played out with the commencement of the IVF in 2020, and delivery of the first set of babies through the process.

He appreciated the team that took part in the delivery.

A former CMD, Prof. Abiodun Ilesanmi, also praised Otegbayo for not abandoning the IVF project which he (Ilesanmi) initiated about 13 years ago.