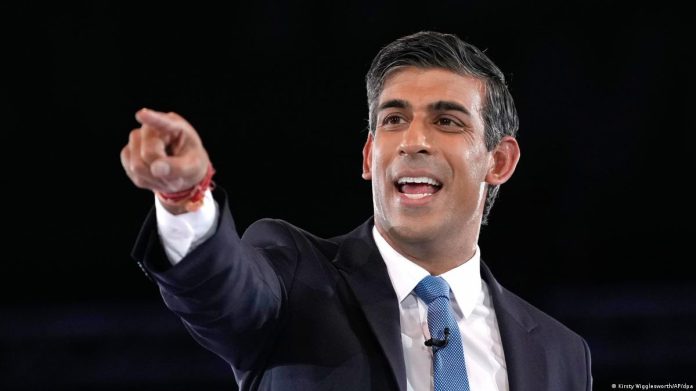 Rishi Sunak has said the UK would create “one of the world’s most attractive visa regimes for entrepreneurs and highly-skilled people” as he set out plans for artificial intelligence experts to come to the country,
The PM said: “We cannot allow the world’s top AI talent to be drawn to America or China.
“That’s why – building on the AI scholarships and masters conversion courses I instigated as Chancellor – we are launching a programme to identify and attract the world’s top 100 young talents on AI.”
Sunak also said the UK “will not pursue any relationship with Europe that relies on alignment with EU laws” under his leadership.
Rishi Sunak has rejected any move to rebuild damaged trade with the EU that would undermine the UK’s freedoms, insisting Brexit is “delivering” for the country.
Speaking to the CBI conference, the prime minister was asked how he would deliver on the chancellor’s claim that the “vast majority” of barriers – blamed for a 15 per cent plunge in trade – can be removed.
Jeremy Hunt’s comments have alarmed many Tories, despite the government rejecting suggestions that it will pursue a closer “Swiss-style” agreement with Brussels.
But Mr Sunak insisted: “Let me be unequivocal about this. Under my leadership, the UK will not pursue any relationship with Europe that relies on alignment with EU laws.”
Earlier the CBI set a collision course with the government after its director general, Tony Danker, urged politicians to end rows over Brexit and plug labour shortages with immigration.
No return to EU alignment
Sunak has insisted he would not allow any return to alignment with EU rules.
“Let me be unequivocal about this: Under my leadership, the United Kingdom will not pursue any relationship with Europe that relies on alignment with EU laws,” he told the CBI conference in Birmingham.
“I voted for Brexit, I believe in Brexit and I know that Brexit can deliver, and is already delivering, enormous benefits and opportunities for the country – migration being an immediate one where we have proper control of our borders and are able to have a conversation with the country about the type of migration that we want and need.
“We weren’t able to do that inside the European Union, at least now we are in control of it.
“When it comes to trade, it means that we can open up our country to the world’s fastest-growing markets. I’ve just got back from the G20 in Indonesia, we’re talking about signing CPTPP, where we’ve got some of the most exciting, fastest-growing economies in the world and we can become a part of that trading bloc, that’s a fantastic opportunity for the UK.”
The UK could also have “regulatory regimes that are fit for the future that ensure that this country can be leaders in those industries that are going to create the jobs and the growth of the future”.
He said “part of the reason we ended the free movement of labour was to rebuild public consent in our immigration system”.
“If we’re going to have a system that allows businesses to access the best and brightest from around the world, we need to do more to give the British people trust and confidence that the system works and is fair.
“That means tackling illegal migration.”
Sunak said the UK is committed to using its “Brexit freedoms” to drive innovation.
The PM said he wants to lead a country with a “culture of innovation” that “permeates every aspect of what we do”.
On how that can be achieved, he said: “First, we need to harness innovation to drive economic growth. Second, we need to embed innovation in our public services, especially our NHS. Third, we need to teach people the skills to become great innovators.”
He said it is “private-sector innovations” that “really drive growth”, adding: “You’d expect me to say that, I’m a Conservative, but it’s true.
“That’s why the autumn statement cut taxes to encourage larger companies to do more research and development. It’s why we want to allow businesses to claim R&D tax relief on pure maths and cloud computing.
“It’s why we’re absolutely committed to using our new Brexit freedoms to create the most pro-innovation regulatory environment in the world in sectors like life sciences, financial services, AI and data.”
- Advertisement -