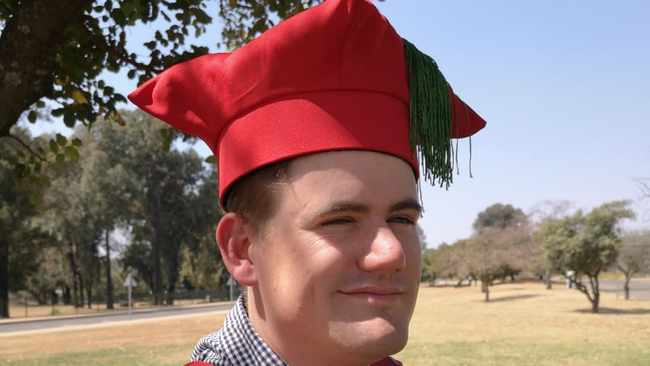 Barnes, a University of Pretoria Masters student, received a pleasant surprise after submitting his dissertation for external examination, only for it to be so exceptional that it was converted into a PhD.
His dissertation, focusing on atmospheric dynamics, was, according to an international examiner from Oxford University, “a truly outstanding and exceptional piece of work” based on the depth and breadth of the work that was submitted.
Barnes said the thesis studied the dynamics of upper tropospheric weather systems called cut-off lows, analysing the properties of these weather systems that extend all the way to the surface compared to those that do not.

READ ALSO: UNIZIK Student Reportedly Dies After She Was Not Attended To By Doctors

Although he paid his dues by juggling his studies and his job as a research scientist in the South African Weather Service’s marine research unit, where he is involved in the development of numerical models and associated forecast products and services, Barnes said getting the job done was no easy feat.
“At the time of completing my Masters, I was working full-time and found it exceptionally challenging. Working and studying at the same time is no joke because finding a work-study-life balance is not easy.”
Barnes said although he believed perseverance was key to making it, in his situation it also helped him that he had a friend from undergraduate studies who began and completed his course alongside him as he found that he struggled during his first year of study.
“Finding a friend who is starting their degree around the same time as you and is on the same path can also help you. Just having someone who understood exactly what I was going through was very helpful.”
Dr Thando Ndarana, BSc Meteorology programme co-ordinator and senior lecturer and Barnes’s superviser alongside Professor Willem Landman, the programme co-ordinator and professor in the department of geography, geoinformatics and meteorology in the faculty of natural and agricultural sciences, said they were impressed with his work ethic.
Ndarana said the reason he praised Barnes was due to the fact he had already published his first paper from his research in Atmospheric Research, a very high-impact and reputable journal, as well as the second article in Climate Dynamics, an equally reputable journal of the atmospheric sciences, even before he submitted his MSc dissertation for examination. Ndarana said both these papers closed a knowledge gap in the literature.
“The remarkable thing about Michael’s journey is he was working as a full-time researcher at the South African Weather Service, which is a technically demanding operational organisation.
“Over and above that he led the development of the operational marine forecasting system there and published five papers in high-impact journals that were based on this system. These papers had nothing to do with his academic research; meaning he needed to find time for the latter after working hours.”
IOL