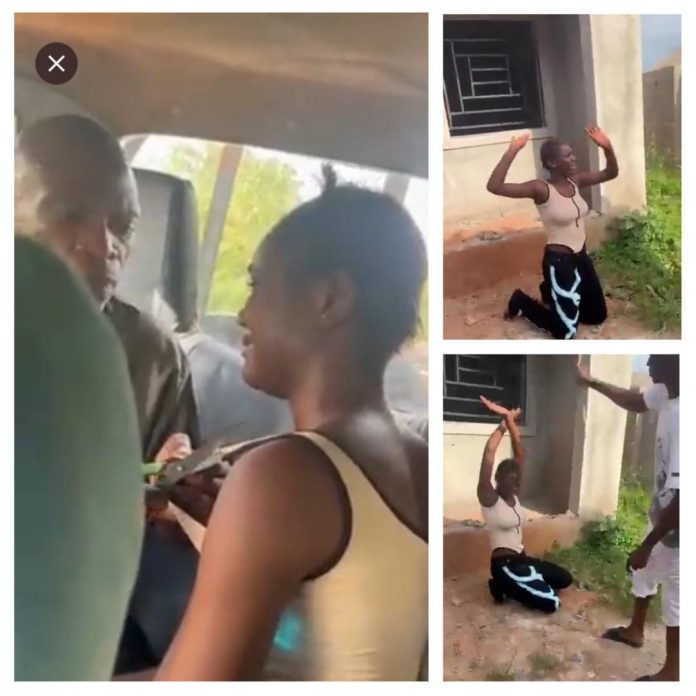 A lecturer at the Federal University, Lafia, Nasarawa, Fred Ayokhai, has been called out on social media for attacking a 20-year-old student of the institution.

In a series of viral videos, Ayokhai, who reportedly works at the History and International Relations department of the institution, was caught on camera with his children assaulting and stripping the lady, now identified as Blessing Mathias, naked.
It was gathered that prior to being assaulted, Blessing had beaten the lecturer’s daughter, Emmanuella, for trying to snatch her boyfriend identified as IG.
Their fight ensued after she discovered that Nuella had her boyfriend’s number in her phone, which she refused to delete.

The said lady gathered her friends to beat Emmanuella. She was seen slapping Emmanuella and hitting her from different angles, asking her to delete the number.
Days after the fight, Emmanuella in the company of her father, Fred Ekpe Ayokhai, and his brother, Praise Shola, and others attacked Blessing in retaliation.
While also being driven to an unknown location as captured in a viral video, Ayokhai used scissors to cut off Blessing’s clothes, exposing sensitive parts of her body.
Commenting on the development; the Nasarawa State Police Command, via its official Twitter page, said, “Sequel to the viral tweet of assault on a female teenager in Lafia, the Command swiftly commenced an investigation into the case.”
“It is gratifying to state that, two suspects have been arrested in connection with the case while
the vehicle used in conveying the victim to an undisclosed location where she was assaulted has been recovered.’
“Effort is ongoing to arrest the remaining suspects still at large”