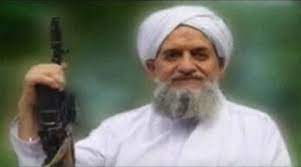 The United States on Monday said it has killed al Qaeda leader Ayman al-Zawahiri in a drone strike, according to multiple sources familiar with the matter.
Zawahiri, who just turned 71 years old, had remained a visible international symbol of the group, 11 years after the US killed Osama Bin Laden. At one point, he acted as bin Laden’s personal physician.
“Over the weekend, the United States conducted a counterterrorism operation against a significant Al Qaeda target in Afghanistan. The operation was successful and there were no civilian casualties,” a senior administration official said.
Biden, who tested positive for Covid-19 on Monday as he deals with a rebound case of the virus, will speak outdoors from the Blue Room Balcony at the White House.
The US State Department had offered a reward of up to $25 million for information leading directly to the capture of Zawahiri.
A June 2021 United Nations report suggested he was located somewhere in the border region of Afghanistan and Pakistan, and that he may have been too frail to be featured in propaganda.
Zawahiri comes from a distinguished Egyptian family, according to the New York Times. His grandfather, Rabia’a al-Zawahiri, was an imam at al-Azhar University in Cairo. His great-uncle, Abdel Rahman Azzam, was the first secretary of the Arab League.
He helped to mastermind the deadliest terror attack on American soil when hijackers turned US airliners into missiles.
“Those 19 brothers who went out and gave their souls to Allah almighty, God almighty has granted them this victory we are enjoying now,” al-Zawahiri said in a videotaped message released in April 2002.
It was the first of many taunting messages the terrorist — who became al Qaeda’s leader after US forces killed bin Laden in 2011 — would send out over the years, urging militants to continue the fight against America and chiding US leaders.
Zawahiri was constantly on the move once the US-led invasion of Afghanistan began after the September 11, 2001, attacks. At one point, he narrowly escaped a US onslaught in the rugged, mountainous Tora Bora region of Afghanistan, an attack that left his wife and children dead.
Source: CNN