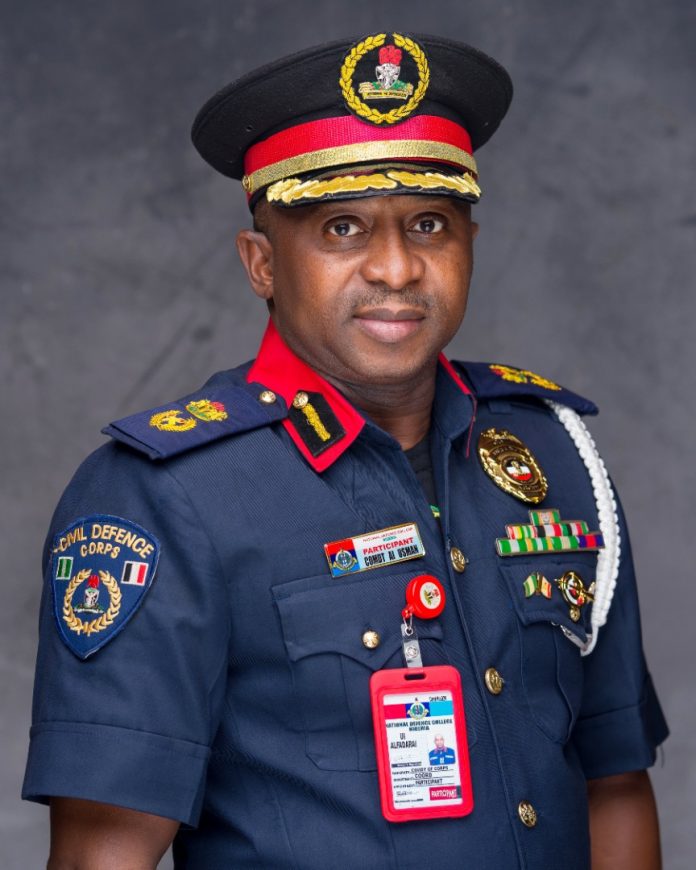 According to DSC Abolurin Oluwaseun, spokesperson of NSCDC Lagos Command, Alfadarai stepped into the mantle of leadership on Monday.

Alfadarai reassured Lagosians of maximum protection of critical national assets and infrastructure, through robust engagement with critical stakeholders and synergy with security agencies amongst others.

The NSCDC Commander was born in 1970 in Zaria city, in Zaria Local Government Area ( LGA ) of Kaduna State.

“After his secondary education, he attended School of Basic Studies, Bauchi State Polytechnic, Bauchi from 1987 to 1989. He then proceeded to the prestigious and popular Ahmadu Bello University, Zaria from 1990 to 1993, where he bagged his Bachelor of Science Degree in Political Science.

“As a result of his unrelenting quest for knowledge, he also holds a Master’s Degree in Public Administration ( MPA ) from the prestigious University of Lagos.

“CC Usman Alfadarai was enlisted into the service in 2006 and rose through hardwork, dedication and commitment to the rank of Commandant of Corps.

“He has also served in various capacities in the Corps in several States of the Federation, which include, these amongst others, Divisional Officer of Giwa, Chikun, Jaba and also Jema’a LGA of Kaduna State; Head of Operations Department at Kano, Katsina, and Zamfara State Commands; Head of Administration Department at Jigawa and Zamfara State Command.

“More so, the erudite and seasoned senior officer belongs to quite a number of renowned academic, professional and strategic bodies, which include; Fellow National Defence College ( fdc ), course 30 and Member Nigeria Institute of Management ( mnim ) amongst others .

“Most recently, the new NSCDC, Lagos State Commandant also served as the Principal Staff Officer ( PSO ) to the erudite, enigmatic, sedulous, sagacious amiable and indefatigable Commandant General ( CG ), Nigeria Security and Civil Defense Corps, CG Ahmed Abubakar Audi, PhD, mni, OFR, where he has acquired the very needed leadership, operational, tactical and administrative strategies and tacts to turnaround Lagos State Command and ensure the safety of lives and property in line with the Corps’ mandate in the State .

“The new State Commandant, while addressing officers and men of the Command, today, re-assures Lagosians of maximum protection of critical national assets and infrastructure, through robust engagement with critical stakeholders and synergy with all other security agencies, religious bodies, community leaders and youths especially, now, that we are closer to the forthcoming 2023 general elections and beyond .

“He is happily married and blessed with wonderful children.”