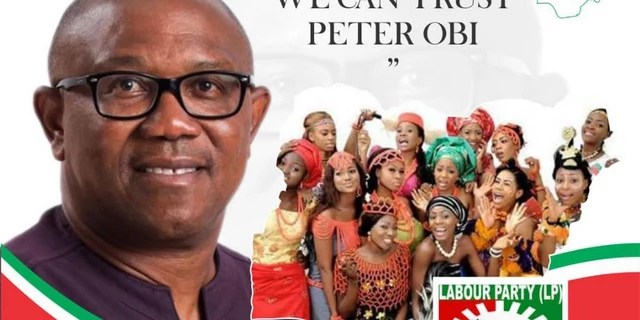 Widows in Anambra has promised to rain curses on anyone against Labour Party candidates in the coming elections.

The widows pledged to raise support for Peter Obi, the party’s presidential candidate.

In Anambra State, the widows have pledged to curse anyone or any group of people that votes against the Labour Party and its candidates in the general elections of 2023.

The widows made a commitment to rally support for Victor Umeh, a senate candidate, and Peter Obi, the party’s nominee for president.

This was stated by the group leader, Mrs Hope Nwandu, in Awka on Saturday, July 2, 2022.

Nwandu said her group has commenced mobilisation of votes for Obi and other Labour Party candidates and anybody contesting against them is fighting a lost battle.

She added that nothing will stop Umeh from winning the senatorial election of the Anambra Central senatorial zone in 2023.

Nwandu said those sharing N1m to each ward in Anambra Central zone were only wasting their money and would have themselves to blame at the end of the day.

She mentioned that a senatorial candidate has started giving out N1m to each of the wards in the Central senatorial zone, but that his efforts would end up being futile.

Nwandu said, “Those selfish people contesting against Umeh are just wasting their time. Where have they been all this while, any time election comes, they will start sharing money, wrapper, rice and other things.

“After the election, they won’t take your calls again. But Umeh has always been there for the downtrodden, whether he’s holding any political office or not.

“The mobilisation from our over 3,000 members is on and anybody who thinks otherwise, will have us to contend with.”

Obi will vie for the presidency in 2023 with other frontline candidates including that of the ruling All Progressives Congress (APC), Bola Tinubu, Atiku Abubakar of the opposition Peoples Democratic Party and Senator Rabiu Musa Kwankwaso of the New Nigeria Peoples Party (NNPP).

For Umeh, he will be battling the senatorial election against Chief Kodilichukwu Okelekwe of the APC, Senator Uche Ekwunife pdp and Hon. Dozie Nwankwo of the All Progressives Grand Alliance (APGA).