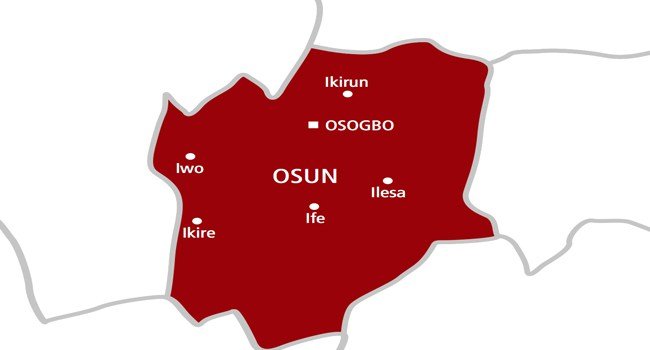 The Executive Chairman, Osun State Universal Basic Education Board (SUBEB), Hon. Israel Ajibola Famurewa, has restated the commitment of the Governor Adegboyega Oyetola-led administration to  reposition the basic education system in the State.
Famurewa stated this on Monday when he led some officials of the board and the Publisher/Editor-in-Chief, All Progressives Congress (APC) News Online, Dr. Tom Ohikere on an inspection tour of some school infrastructural projects undertaken by the board.
He said since inception, the present administration  has always paid adequate attention to things that would give astronomical development to education sector in the State, expecially the basic education system.
Famurewa who was accompanied by the Board’s Commissioner, Hon. Moshood Adekunle Oluawo, Executive Secretary, Mr. Adeoye Bakare and other officials of the Board, added that the government had ensured a facelift of infrastructural and academic development.
According to him, several classrooms had been constructed, renovated and rehabilitated as the case may be to advance the quality of teaching and learning in all the public schools across the State.
Some of the schools visited were; Ataoja School of Science; Anthony Udofia Primary School both in Osogbo; Ijesa Muslim Grammar School, Ilesa;
St. Philip’s Primary School, Ile-Ife; St. Stephen’s Grammar School, Modakeke; Urban Day Grammar School Ile-Ife; Oogi Community Grammar School; Adejuwon Government middle School, Owode-Ede.
Speaking with newsmen after the inspection, Dr. Tom Ohikere lauded the huge investment of Governor Oyetola on education sector in the State, describing Osun as one of the leading light in the promotion of education in the country.
He also commended the Governor for prioritising education and giving the sector the prime place as the bedrock of socioeconomic development of the State, saying that ‘Osun has become a reference point in basic education system in Nigeria.’
Ohikere said further: “We are going round the country particularly the All Progressives Congress (APC) ruling States to take stock of development particularly in the area of basic education sector. We are in Osun State today which is the first State to be visited in the Southwest. We have been to Northwest and Northeast.
“This tour is a collaboration between the Universal Basic Education Commission and the All Progressives Congress (APC) News Online to take stock of basic educational development in the APC controlled States.

“From what I have seen so far in terms of the State’s prompt intervention on education, Osun has become a reference point in basic education system in Nigeria. This is so because of the quality of job done and still doing as well as the policies environment to raise the bar of education sector in the State.
“As you can see, we have the Chairman SUBEB and his team going round with us, this didn’t happen in other States. If you look it from where we started in Osogbo, the kind of projects we saw are first of its kind in the country. We have not seen them anywhere. We only saw something related to that in Nasarawa State and it is about ICT Centre.
“What we saw here are so massive and we are impressed that the State has been driving their projects with systematical approach to basic education. We have been to Osun Central and we have just finished with Osun East Senatorial District and we are at Osun West.
“Part of what we have come here to do is to look at the learning environment, learning space, teaching and learning facilities, teachers’ welfare, teachers’ training and retraining. In the course of this tour, we have met with the pupils and the teachers and it is good to tell you that Osun teachers are very happy.
“We are equally happy that the State has been doing excellently well as reflected in its performance index. We have found out that the State is second in Joint Admission and Matriculation Board (JAMB) just as its pupils took first the the general contest.
“These are the bases we are here for. Investment on education can only be measured by the outcome. The outcome so far is wonderful and I believe it will be like this in all the States.
“My advice for the citizens is to know that the development on education is a collective responsibility. We expect the community to take full and maximum advantage of the facilities provided by the government.”