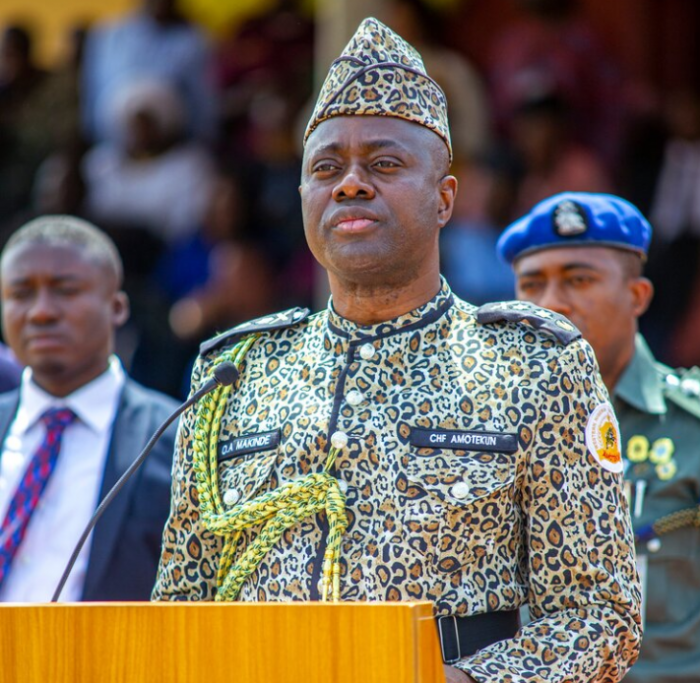 Oyo State Governor, ‘Seyi Makinde, said on Monday, at the inauguration of the Board of the Oyo State Security Network Agency, codenamed Amotekun, that the people of the state will see more visible actions being taken by the government to secure the state.

He called on residents not to panic but join hands to secure the state.

“We know that because of the policies of this administration, a lot of people are coming into Oyo State, and when you have more and more people coming in, it will come with its own set of challenges and with opportunities as well.

“In the days ahead, we will also let the people of Oyo State know the things we are doing as far as security is concerned. And when they see security operatives all around, they must give them total support.

“Yes, I can go to Igangan and take responsibility for some of these activities but security is our collective responsibility. It is not just for the government or governor alone. So, everybody needs to come on board and play their own part,” he said.

Makinde, at the event held inside the Executive Chamber of the Governor’s Office, Secretariat, Agodi, Ibadan, indicated that the 12-member Board has as its chairman, Brig-General Ajibola Kunle Togun (rtd) and Mrs. Akinbode Iyabode Enitan as secretary.

Some of the members of the Board include the Amotekun Commandant, Col. Bisiriyu Olayinka Olayanju (rtd), the Commissioner of Police; State Commandant of the Nigeria Security and Defence Corps; representative of the Armed Forces of Nigeria in the state; and the Executive Secretary, Oyo State Security Trust Fund and Special Adviser on Security, COMPOL Fatai Owoseni (rtd).

The governor maintained that the inauguration of the board will pave the way for more inter-agency relationships with similar security networks in the neighbouring states, urging the heads of security agencies in the state to provide necessary support and cooperation.
He said: “Since the passing out of the 1,500 members of Amotekun Corps in November last year, they have been operating under the leadership of General Togun and the Commandant, Colonel Olayanju.
“As we continue to expand our security architecture and improve our system, and also in fulfillment of the law setting up the Amotekun Corps, we have to inaugurate the Board, and that is exactly what we are doing here today.
“The law establishing the Oyo State Security and Network Agency codenamed Amotekun Corps to assist in maintaining law and order in the state and for other matters connected therewith, stipulates the establishment of the Governing board in section 7.
“We believe that with the inauguration of this board today, we will see even more visible action in securing Oyo State, especially in the area of fostering relationships between Amotekun of Oyo State and similar security network agencies in our neighboring states:Ondo, Osun, Ogun and Ekiti States.
“We also expect more inter-agency cooperation within the state. Remember that one of the reasons we started the Amotekun Corps is to bring security operatives closer to the people. We were asking for state police and we could not get that because it involves amending the constitution of the country and it is a big task. But while we were waiting for that, we believed that we had to move on.”

Appealing to individuals trying to discredit Amotekun and politicise the insecurity situation to desist from such a path, Governor Makinde said it will not bode well for anyone to destroy the state in the name of politics or seeking political power.
He called on all residents to join hands with the state government to surmount the security challenges, which, according to him, is not peculiar to Oyo State.
He said :“I have been listening and watching people try to politicise the issue of security. Well, I want to appeal to such individuals within the state; it is our state and it is only God that puts people in position. If you want to destroy your state before everybody to gain political power, I wonder what kind of state such an individual or group of people will want to preside over.
“We have seen cases where they doctored videos to discredit Amotekun. We have seen cases where people go out and lie outright. Now, everybody has been on the street as an advisor on security. They have all sorts of advice they gave to me and I asked them where they practiced their own security. They have not gone beyond their streets, maybe they organized neighborhood watch and they think that it is the qualification on how to advise us on the issue of security.
“Well, some of these people are saying insecurity is the major challenge in Oyo State. Yes, the country is going through quite a bit but I challenge them to a debate. I am ready. Let them come and tell us what they will be doing differently. They have nothing to offer the people of Oyo State apart from wanting to ride on the perception of insecurity to gain prominence.
“They should wait and let us build Oyo State together. If it is God’s will for them to be in power in 2023, God will do it for them easily. But we must not destroy our state. We must not politicise insecurity. Yes, some people did it at the national level and gained power in 2015 but Nigerians are wiser.”