The Nigerian Communication Satellite Ltd, (NIGCOMSAT), the commercial arm of Nigeria’s space agency, shocked some Nigerians when it recently announced that it was targeting 2025 for the acquisition of two satellites, to boost its global profile as a satellite operator.

Its Director and Chief Executive Officer, Abimbola Alale, had told stakeholders at a forum in Lagos that the agency would between now and 2025 acquire more satellites with the NigComSat-2 Hight Throughput Satellite, due for launch in 2023, and the NigComSat-3 to be launched in 2025.

Alale said providing an advance satellite communication solution is the agency’s modest contributions to Nigeria’s digital economy.  He went further by specially acknowledging what he described as the relentless efforts of Isa Ibrahim Pantami, Minister of Communications and Digital Economy, in building a digital Nigeria as well as supporting NIGCOMSAT in the growth of the nation’s Gross Domestic Product (GDP), whatever that means.

Well, the focus of this article is not to dissect Nigerian politicians and political office holders’ penchant for hypocrisy and sycophancy. Rather, I am bothered about how an agency created as a commercial entity to market Nigeria’s satellite products is proudly neglecting its primary responsibility and drifting to what is outside its purview, more so when the country is yet to get any tangible commercial value from its space exploration. Space activities are expected to yield diverse economic benefits that should include more employment opportunities, revenues, technological and scientific excellence, and innovation. I doubt if this is yet the reality in today’s Nigeria.

Space activities in other parts of the world also impact positively on other segments of the economy aside generating commercial revenues. They impact on agriculture, transport and the environment. Technology transfers from space exploration can also impact on medical practice with tele-medicine, medical imagery, etc. Generating these kinds of benefits from our investment in space, for me, should be the concern of NIGCOMSAT as a commercial venture, and not the launch of satellites. 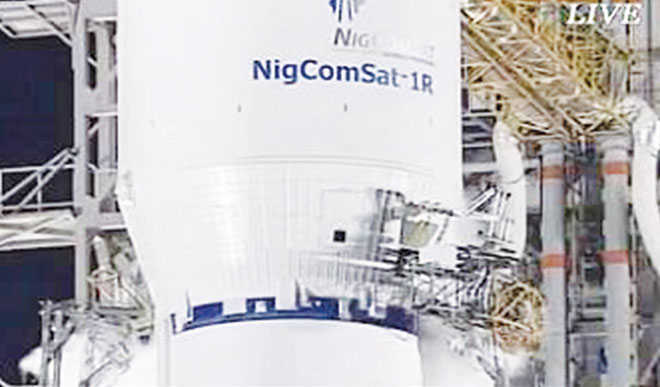 Recall that Nigeria’s first communication satellite, NigComSat-1, was developed and launched in China in 2007 by the National Space Research and Development Agency (NASRDA).  It was subsequently de-orbited in 2008 following a power failure. Subsequently, NigComSat-1R was developed and launched as a replacement for NigComsat-1 in 2011 by China. NigComsat-1R with its on-board capabilities, can provide fixed and mobile communications, In other words, it can be used for mobile communications involving ships, planes, vehicles, hand-held terminals operating in its coverage area; for television and radio broadcasting; and for supporting military communications, internet and broadband services especially in remote and underserved areas.

Nigcomsat as a commercial entity is expected to ensure that Nigeria makes tangible money from this kind of investment. For example, Nigeria should be getting enough revenue from its investment in satellite technology to boost its economy and even invest more into space business going by Nigeria’s NigComSat-1/1R’s communication footprints over Nigeria, the ECOWAS region, and other areas in Africa and Europe. After all, the Global Positioning System (GPS) is said to have generated socio-economic benefits worth some USD 1.4 trillion in the United States alone since its introduction in the 1980s.  Space exploration is capital intensive with lots of government funds going into it. So, there should be a way of getting appreciable returns from these investments. Little wonder, several countries commission national surveys with the aim of getting relevant statistics to monitor the performance of their space technology in order to improve the management, allocation and focus of public investments.

For countries that know what they are doing, revenues from space exploration can be enormous. Estimated annual global commercial revenues from the space sector are in the range of USD 280-300 billion (OECD, 2019). The bulk of these revenues come from commercial satellite services based on satellite capacity (e.g. telecommunications signals), space systems’ manufacturing and consumer equipment.

Unfortunately, there is no information in the public domain in Nigeria as to the functional and operational status of our own satellite. We have no idea about the performance of NigComSat-1R, for example. This perhaps is responsible for the continued capital flight from Nigeria and Africa at large in the communication sector. More than US$4.5B is spent on communication satellites’ transponders leased from foreign satellites annually, going by an underestimated 5million Nigerians on full subscription to DSTV TV broadcasting.  We don’t even know if the NigComSat-1 is still functional. Yet, these should be the responsibilities of the Nigerian Communication Satellite Ltd, as the sole marketer of satellite communication services on behalf of the Federal Government of Nigeria.

There are no visible signs that Nigeria is taking advantage of the robust demand for telecommunication and satellite television broadcast services by institutional users within the ECOWAS region.  Meanwhile, if properly managed, our satellites could have generated revenue more than the annual budgets of some African countries. As it is, European and American consortiums such as Eutelsat, Intelsat and SES are taking advantage of our failure as they own most of the satellites that provide communication services in Africa.   These major foreign operators were said to have generated over US$6.7B in revenue in 2013, with the chunk of revenue coming from the fast growing market in the developing nations including Nigeria and the entire ECOWAS region.

There is also the colossal sum in billions of dollars paid as charges by different institutions and MDAs of government in Nigeria to foreign communication satellite owners for the provision of telecommunication and broadcasting services. The gross annual impact of these channels of capital flight from Nigeria contributes more than the total cost of building and launching another communication satellite for Nigeria!

With this level of untapped potential crying for attention, what is NIGCOMSAT business with launching a satellite? What is the fascination about satellite for a company merely registered in 2005 as a purely commercial outfit? NIGCOMSAT is expected to handle the sale and lease of transponders of NigComSat-1/1R for communication satellite services just as its counterpart, GeoApps Plus Ltd, established in 2009, is expected to handle the sale of satellite images acquired by Nigeria’s earth observation satellite.  And why the unnecessary competition with NASRDA, Nigeria’s space agency constitutionally saddled with the responsibility of overseeing the country’s space policy?

At least we have it in public domain that Section 5 (a) of the NASRDA Act 2010 gives the space agency the sole responsibility of procuring and launching earth orbits whether low, medium or geostationary earth orbits. Section 6 (b) of the Act also mandates NASRDA to serve as the only government agency responsible for the building and launching of satellites in Nigeria. Does Nigeria now have two bodies in charge of its space policy?

Just in June this year, President Muhammadu Buhari reaffirmed the strategic and constitutional role of NASRDA as the only Government Agency saddled with the core mandate to build and launch satellites for various applications in Nigeria.  As if the provision of the NASRDA was not clear enough, the president while presiding over the National Space Council (NSC) meeting at the statehouse in Abuja explained that the development of Space Science and Technology, particularly the launch of earth observation, communication and navigation satellites, remains the core mandate of the nation’s premier Space Agency. He also directed all stakeholders in the Space sector to strictly abide by the NASRDA Act 2010.

Really, the competition over who takes charge of Nigeria’s space policy between NASRDA and NIGCOMSAT seems to have been on for a while. This prompted the SGF in 2011 to direct, among others, that NASRDA should focus on its statutory function of development and launch of satellites while NigComSat should focus only on the commercialization of satellite resources.  Also, in 2012, the Solicitor-General of the Federation reiterated that NASRDA was the sole Agency of Government responsible for the building and launching of satellites. Similarly, the Oransanye report on the rationalization of MDAs also recommended that the control of Nigcomsat-1R be reverted to NASRDA while the downstream segment of the satellite should be commercialised.

The global practice is that nations own single space agencies. These agencies are overseen by government establishments while commercial outfits are in charge of marketing satellite products to generate revenue.  When NASRDA was established in 1999, it was to serve the   purpose of exploiting Nigeria’s space resources to further reposition the country towards national socio-economic development.  NASRDA is equally recognised as  the national space agency of Nigeria. So far, the agency has developed and launched a total of five satellites for earth observation and satellite communication.  Why is Nigeria finding it difficult to have a single space agency?  What is the big deal in launching satellite that is making NIGCOMSAT to be so desperate in being in charge of it?

As it is, Nigeria has to revisit the goal of its space activities. Space technology is not just an investment, it is investment done with the mindset of generating revenue, creating employment and boosting the country’s GDP. NIGCOMSAT should face its primary purpose of commercialising Nigeria’s space products.  Perhaps, relocating it back to NASRDA may help it to have more focus and save it from its current distractions.

That being said, those in charge of our space policy should know that exploration in space is not just for show, it is for impact.  For example, space manufacturers and agencies contributed actively to the response efforts during the COVID-19 crisis. They produced medical equipment, provided storage and processing capabilities for modelling and other research needs.  Space actors also provided high-speed connectivity to remote locations- establishing links to remote hospitals, residential and small business customers, and deployment of online solutions for schooling. They also made available earth observation imagery for industry intelligence and monitoring of remotely located infrastructure. When is Nigeria going to tell her own success story in space?

How I Remember #ENDSARS One Year After By Azu Ishiekwene

A critique of Hakeem Baba-Ahmed’s ‘rejoinder’ By Lasisi Olagunju