Home Education Edu-News Why it took me so long to bag a Ph. D –...
Facebook
Twitter
WhatsApp
Linkedin
Telegram 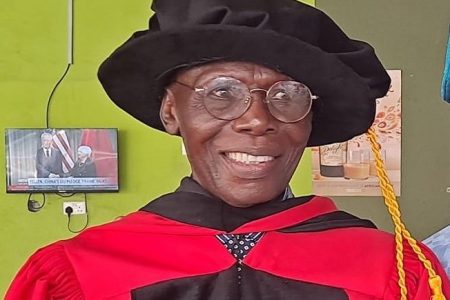 Dr. Dayo Duyile, a veteran journalist has explained why it took him so long to bag a doctorate degree at 83.

Duyile was on Wednesday one of those who bagged their postgraduate degrees at the University of Lagos 53rd special convocation. He was the oldest graduate and was the cynosure of all eyes not only because of his age but because he reported the foundation laying ceremony of the university in 1962 for the Daily Times Newspapers.

Speaking at a special reception put together by a group of journalists for him in Yaba on Wednesday night, Duyile said he was happy to have been able to achieve his dream at his age.

According to him, he decided to pursue a higher degree because in the 80s when he attended an interview for the post of the director of the Nigeria Institute of Journalism (NIJ), Ogba, he was not given despite his performance.

He said the post was given to another candidate who had a Ph.D. He said he later met Chief Olusegun Osoba who was a member of the interview panel and asked why he was not given the post despite his performance. He was told that the other candidate was preferred because of his higher qualification. That made him determine to chart that path.

However, when the former governor of Lagos State, the late Lateef Jakande, was released from detention after the military coup of 1983, he asked why the post was given to a Ph. D holder who had no field experience. He then asked him to apply for the post of deputy director, which was not advertised. The post was then created specifically for him to occupy.

Duyile who later became the director of the institute, said some years later he got admitted to a university in the United States of America to go and pursue a higher degree. He turned the offer down because Jakande said he was not going to release him at that point because his services were crucial to the institute.

He had to forgo that opportunity as a reciprocal gesture to the former governor and eminent journalist. He added other opportunities that came his way but he had to jettison them because they always came at a time he needed to pursue other engagements.

Duyile further added that he then began an online Ph. D programme but had to abandon it when Prof Ralph Akinfeleye convinced him to drop it and register for it at the University of Lagos. He expressed satisfaction that he was able to achieve his lifelong dream as an octogenarian.

He said, “ I feel on top of the world because I have been longing for this opportunity for about 35 to 40 years now. I have been resilient, making efforts to go to the university to do my Ph.D., and today, it is a reality, and even at my age, it is something to be proud of.”  He said interacting with younger students made him feel young too.

“By mixing and interacting with them, I did not only have fun, but it also made me feel much younger. I felt like a very young man because I was always sharing their views, and discussing on the same platform and there was nothing like aging in our discussions.

“All that we discussed was either academic, political or international issues. So, in fact, I really loved and enjoyed being in the midst of younger people because it made me feel young myself.”

On what has kept him on till date he said, “When I started journalism in the 1960s, my editor told me that in this profession, you might not be rich, but you will be famous, people will love you if only you are doing the right thing and are capable of writing well and be upright.”

He advised young journalists and other professionals to ensure they are knowledgeable in almost everything so as to be able to highlight and share societal challenges, as well as strive to proffer solutions to some of these challenges.

“Otherwise, if you are looking for how to become a millionaire, then, this is not the place for you. So, again, I will advise the younger ones to be serious, and committed to the profession because the sky will be the limit to every good writer here in Africa and globally.”

Duyile was one of the 2,251 graduating postgraduate students at the 60th anniversary and 53rd convocation of the University of Lagos.