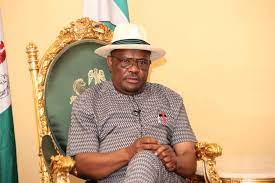 Governor Nyesom Wike on Tuesday urged former Kaduna State governor, Ahmed Makarfi, to stop badmouthing him and be focused on ensuring he delivers victory in Kaduna for the Peoples Democratic Party in next year’s elections.

Wike, during the inauguration of the sand-filled area and estate layout project in Ogbum-Nu-Abali, Port Harcourt, made the remark in response to Makarfi’s recent jabs at the Rivers state governor over the raging crisis in the PDP.

The governor also mocked an alleged rapist in Rivers PDP he failed to name for frolicking with former Vice President and 2023 PDP presidential candidate, Atiku Abubakar, in his campaigns when you should be in Rivers canvassing support for Atiku.

Wike said he watched Makarfi on national television say, “Wike, you’re sabotaging other people. I don’t know who says the other people have not. What I want to advise Makarfi is, look, you have a job, make sure PDP wins in Kaduna State. That is your job, leave Wike alone.

“Take it upon yourself that Kaduna falls to PDP. I don’t want to hear excuses that they rigged election or they didn’t rig election. That is what I’ve told everybody. In Kano, make sure PDP wins. In Niger, make PDP wins, in Jigawa, make sure PDP wins. If you win, then see whether PDP wins here or not. Its operation deliver your state. Don’t use anybody’s state to add up.”

On the unnamed rapist Rivers PDP member frolicking with Atiku, the Rivers governor said, “I was watching television yesterday (Monday) when they went to Kano to receive Shekarau. I saw one rapist from Rivers state sitting at the back where he went to join them to receive Shekarau but I asked him, how many people have you made to join your party in your state?’

“You have gone to receive somebody somewhere but you have not made efforts to receive other people to join your own party in your state. You like when food is ready, you’ll go but for you to cook, it is where people have cooked that you go to eat the food but you won’t cook your own.

“As people who want the party to win or who want their candidate to win the election, what role are you playing in your state to make sure your party wins the election? How many people have you been able to galvanise, mobilise to leave their party to join your party? That is to show you are committed, willing, and ready to make your party win an election.

On his latest stewardship imprint within Ogbum-Nu-Abali, Wike said, “We have created a new city where people will live, provided them with water, electricity, sewage, everything. This place can take at least, not less than 160 families if allocated.”

Performing the inauguration of the project, Governor Ífeanyi Ugwuanyi of Enugu State said, “Wike’s administration has done well and is worthy of our commendation. I salute a standard-bearer in project delivery; a passionate promoter of the tenets of our Constitutional Democracy and Federalism.

“Wike is an unrepentant advocate of the Rule of Law, equity and fair play; a formidable politician; a man imbued with the requisite gravitas for statecraft; and most importantly, my brother and friend.”