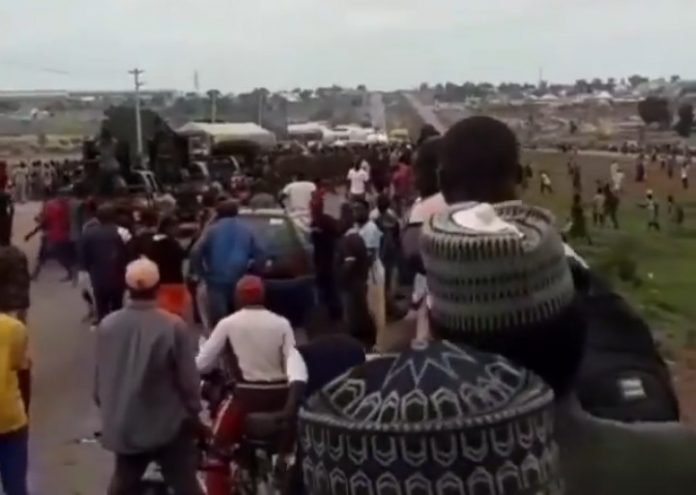 The police in Kaduna state has deployed its operatives to restore order and allow travellers to move on the Kaduna-Abuja dual carriageway, following a protest by hundreds of locals, including half-naked women who blocked the road in anger against the alleged killing of a 13-year-old by bandits.

A couple of days ago, residents of Sabo Gaya ,one of the communities that suffered attacks near the NYSC camp along the highway, cried over the massive exodus from the area due to incessant attacks and abductions by the bandit.

A local has lamented over the absence of security ,alleging that bandits had gone from house to house and abducted a Yoruba trader with her children ,before they went away with a woman and her newly wed daughter.

” The bandits wanted to abduct the newly wed daughter but the women resisted ,insisting she was her only child and will not bear the brunt of losing her. So the bandits went with both mother and her daughter, ‘ he said.

On Saturday , travellers were forced to cut their journey on the Abuja-Kaduna highway as protesting locals blocked the road.

According to a source ,” the protesters are not happy over the killing of a 13-year-old girl by bandits. at Anguwan Magaji in Chikun Local Government Area.

“The bandits stormed the house of the village head and abducted his family as well as other persons in the area. The bandits have stopped us from going to our farms and now they are coming to our houses to kidnap us.”

“They killed a 13-year-old girl, a guard man in the village and kidnapped our people. The Mai Anguwa family ,too,” he said.

He explained that the residents only wanted security or to be allowed to protect themselves against the bandits.

He said that the protesters were so angry and had refused to listen to any plea to free the road.

It was gathered that on the arrival of the police and soldiers, the men left the scene, leaving their womenfolk who continued the protest ,some half naked.

While the security agents were pleading with the women to allow a free flow of traffic ,the men were heard encouraging the women ,some meters away.

The Police Public Relations Officer in Kaduna, ASP Mohammed Jalige, said the Area Commander has been directed to restore law and order in the area.

“We are trying to ensure that the road is open to allow road users access. We are meeting the community leaders and the protesting youths to discuss the problem. There is an incident along the highway but we are trying to control the situation,” he said.