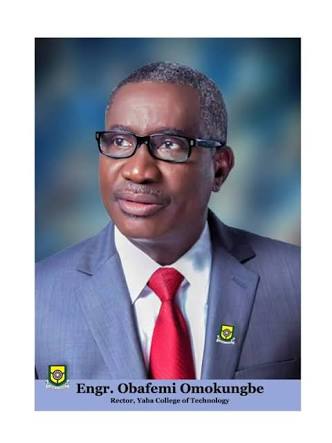 According to the news on the school portal, The 8-man delegation led by the Chairman, NANS JCC Lagos State, Comrade Abdulquowiyy Busari, noted that the award of excellence was given to Omokungbe for his able leadership and infrastructural drive which has created a conducive and enabling environment for proper learning and teaching.

Busari disclosed that he nominated 5 names of prominent personalities in the zone for this prestigious at the last NANS South-West zone meeting but Omokungbe was unanimously selected by all for the award. He stated that the remarkable achievement of Yabatech Rector within the few years of his administration gave him the edge over his counterparts.

According to the Director of Gender, NANS South-West zone, Comrade Precious Abimbola who read the Rector’s citation, “We are proud of you. You have made us understand that leadership is not about a title or a designation. It is about impact, influence and inspiration. Impact involved getting results, influence is about spreading the passion you have to what you do, and how you inspired the generation next (Youth). Sincerely you are a blessing to the next generation, as you remain a role model and mentor.”

“Your unrelenting contributions towards youth and students developmental projects and passion for education were also considered as criteria for this honour bestowed on you today,” she said.

In response, Omokungbe appreciated NANS for the honour, and the elated Rector promised that the award will spur him to do more. He also assured NANS that Student Union Government (SUG) would soon be resuscitated in Yabatech