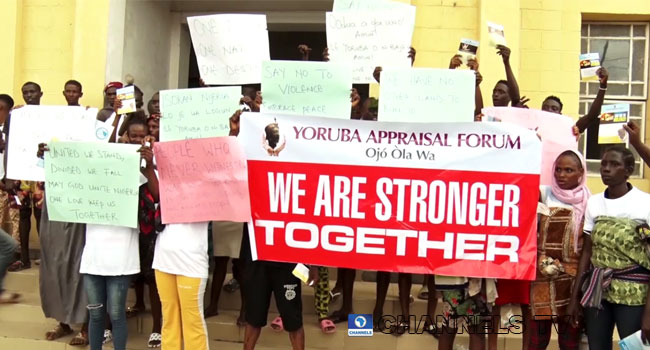 A professional group, Yoruba Appraisal Forum (YAF) on Tuesday staged a protest in Abeokuta, the Ogun State capital rejecting calls for the disintegration of the country.

The group suggested constructive dialogue to address the current sociopolitical and economic challenges facing the country rejecting war and violence as being demonstrated in many parts of the country.

The national coordinator of the group, Adeshina Animashaun while speaking to journalists during the protest held at the centenary hall in the state capital, challenged political leaders to rise to the challenges and ensure peaceful coexistence of all Nigerians.

They however joined voices with those calling for a new constitution for the country, to ensure equity, fairness, and peaceful coexistence.

READ ALSO: How I became friends with TB Joshua in Kuje prison by FFK

The group called on the people of the South-West not to fall for the deception by those claiming to be championing Yoruba’s self-determination and independence, eschew violence, live in peace with other residents of their states, and expose troublemakers in their midst.

The Forum, therefore, urged the police and the other security agencies to take appropriate and urgent steps to deal decisively with these elements bent on fomenting trouble in the South-West and Nigeria as a whole.