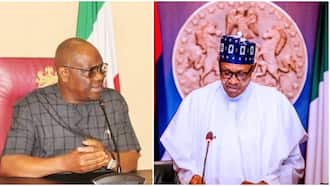 On behalf of state judiciaries across Nigeria, the presidency has cried out over their poor treatment by governors.

In a Channels TV interview, Senator Ita Enang, the senior special assistant to President Muhammadu Buhari on Niger Delta Affairs, lamented that many states are yet to release funds to the judicial arms.

Enang noted that this is contrary to the directive of the president who called for judicial autonomy earlier in his second administration.

Specifically, he said the Rivers government, although deserves commendation for its contribution to the federal high court and law school in the state, has done very badly in terms of treatment of the judicia

Facebook
Twitter
WhatsApp
Linkedin
Telegram
Previous articleBaba Fryo: Davido Shunned Me In My Time Of Need But Donated N250m To Orphanages
Next articleGoal Based Investing – How does it work?