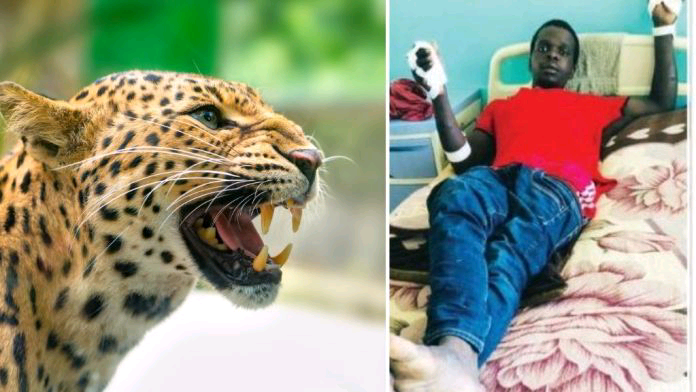 A Zimbabwean man identified as James Chauke has landed in the hospital over injuries he sustained after fighting off a leopard that attacked him while he was relieving himself in the bush.

According to H-Metro on Wednesday, January 11, 2023, the survivor who is 25-year-old is being treated at the Gwanda Provincial Hospital.

Chauke told H-Metro thought he was going to die after the big cat ambushed him.

He said; “It was around lunchtime yesterday (Tuesday) when I was working at a plot close to a dense forest.

“I went to relieve myself. I saw some impalas and other animals and didn’t realise that they were being hunted by a leopard. I was among the animals and never thought there was a dangerous animal.

“I heard growls, but I just thought they were baboons eating something. Ndakati kogudo ririkungoramba richibhonga igudo rudzii. And when I turned to look back, I saw that it was a leopard.

“It was already too late as it was charging at me. When it jumped at me, I grabbed its front leg. I managed to pick up a stone and bashed its mouth.

“It was a moment of life and death for me, and I just kept hitting its mouth with a stone.”

Turkey Earthquake: Miracle as woman gives birth to baby under the rubble (VIDEO)