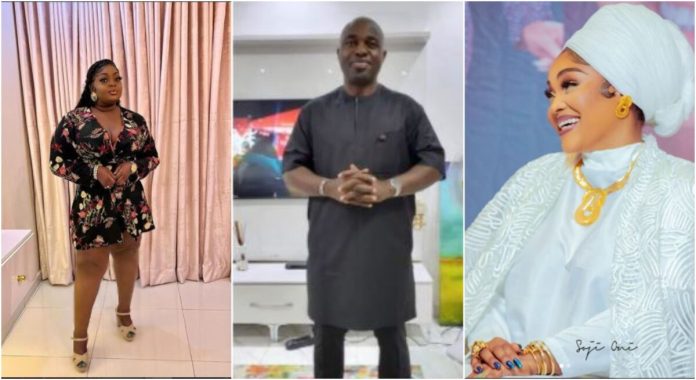 Nollywood actress Eniola Badmus has received a surprise gift from the company of the alleged lover of Mercy Aigbe.

A few weeks ago, an Instagram blogger Gist Lovers, alleged that Mercy Aigbe is romantically linked to the owner of Ibaka TV.

According to the blogger, the man is married with four children and reportedly left his wife and kids in Minnesota.

Taking to her Instagram page, Eniola Badmus expressed appreciation to the owner of Ibaka TV for the surprise hamper gift.

Eniola Badmus said she loves every bit of the gift and is overwhelmed with the thought of such a gift.

She wrote: So @ibakatv surprised me with this gift and I really really love it…..is the thought for me…….thank you @ibakatv I luv every bit of it….Oya make we unwrap this hamper I won chop chocolate

The event, held on Monday night, 3rd January, had many Nollywood stars and music lovers.

Eniola Badmus, for some time now, has been known for always stealing the spotlight of parties as she frequently rains money like controversial crossdresser Bobrisky.

Reacting to the video, some netizens claimed that Eniola Badmus constant show of money at events means she can help Nigeria pay its debt.