Afaka Students’ Parents: We paid N.8m to the person Gumi linked us to but he insisted on N500m (VIDEO) 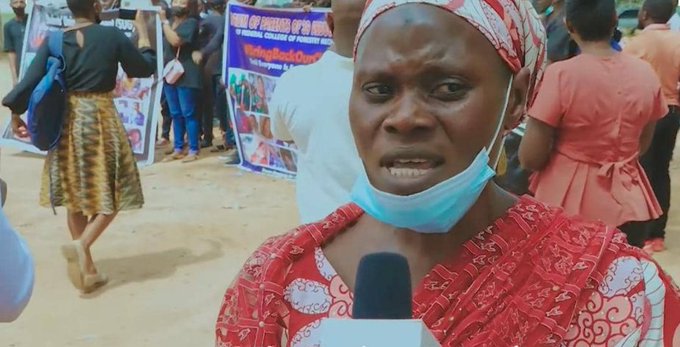 Parents of the 29 kidnapped students of the College of Forestry Mechanisation Afaka, Kaduna State have narrated their ordeal while negotiating with the abductors of their children.

Gunmen had attacked the college located in Igabi LGA in March and abducted the students, but 172 of them were rescued,  while 39 were left  in captivity.

Out of the 39 in captivity, 10 have regained their freedom.

On Tuesday, the parents staged a protest at the National Assembly, asking the federal government to help them secure the release of their children as the Kaduna State government maintains that it will not negotiate with bandits.

According to the parents,  the bandits were calling  them individually to negotiate for their children’s release.

Speaking with Roots TV, one of the parents said they have been trying to secure the release of the abducted students to no avail.

She said the parents had attended several meetings and were taken to Ahmad Gumi, prominent Islamic cleric, who directed them to a Fulani man named Ahmed.

She said the parents paid N800,000 to the man but he said the money was for transportation and insisted that they pay an additional N500 million.

“We kept going for meetings. They took us to Gumi’s house who said we should meet one Ahmed. I’ve forgotten the name. A Fulani man was invited, we contributed almost N800,000 to him but he said the money was just for transportation. Then I started crying and pleaded with him that I am a widow, training my boy to become my helper in the future but he said that was not his concern,” she said.

She said the unidentified Fulani man was invited to an office in Kaduna to meet the parents.

“We kept begging him but he insisted that we must pay N500 million.”

Another parent, who said the trauma was too much to handle, said they have become “walking corpses”.

She said: “The trauma is too much, I can hardly sleep. We are walking corpses. People see us as being alive but we are already dead. In the night, one cannot sleep, if you want to sleep you will be thinking about the condition of your child; if the child is dead, alive, eaten.

“Maybe if my husband were to be alive, he would know somebody who would help him to talk to the government. They kept calling me for almost two weeks and I told them the same thing.”

“@gidi_9ja: WATCH THIS:”They took us to Sheikh Gumi’s house, he directed us to an Ahmed, who invited a Fulani man from Kaduna. We contributed N800,000 for him, he told us that was just for transport…” -Mother of kidnapped Kaduna student.@Gidi_Traffic pic.twitter.com/SZuRxBmBWl

Facebook
Twitter
WhatsApp
Linkedin
Telegram
Previous articleEl-rufai: Jonathan, Yar’adua Persecuted Me Because They Saw Me As A Threat
Next articleJUST IN! Mbaka Is Missing: Ohanaeze Raises Alarm, Gives FG 48 Hours To Produce Him