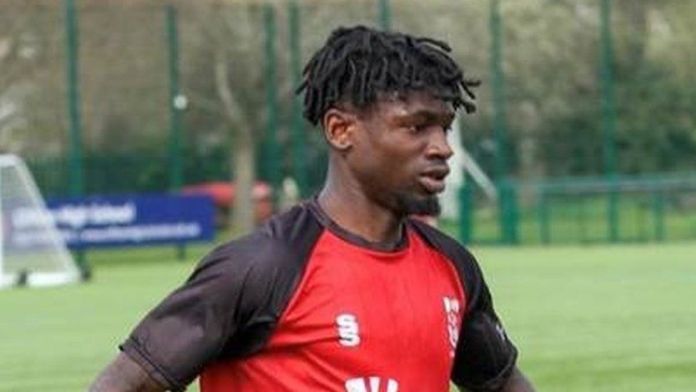 Another Nigerian student, Olisa Odukwe, declared missing since Saturday has been found dead.

Police divers searching for the Bristol University student found his body in the city’s harbour.

Twenty-year old Odukwe was last seen at his home in Redland at 7am in the morning.

The heartbreaking news of his death was shared online today by his devastated girlfriend, Daisy Barrows, who paid tribute to him .

The sad news came after friends and teammates from his University of Bristol Association Football club had searched nearby Leigh Woods.

Avon and Somerset Police said: ‘Yesterday afternoon, police divers located and recovered the body of a man in Bristol Harbour, near Narrow Quay.

‘While formal identification has not yet been carried out, we have updated the family of missing 20-year-old Bristol student Olisa Odukwe. Our thoughts are with them at this difficult time. The man’s death is not being treated as suspicious.’

Olisa Odukwe was the second Nigerian student to be reported dead after being declared missing.

On 7 April, Richard Okorogheye was found dead in a lake in Essex.

The 19 year-old went missing from his home in Ladbroke Grove on Monday, 22 March.

Richard’s mum Evidence Joel, a nurse, reported him missing on Wednesday, 24 March to Met Police, which was nonchalant about the report.

Two more abducted students of Bethel Baptist Secondary school in Kaduna State have been rescued by the police. Reports said the students were rescued on...
Read more
Edu Crime

Ex-JAMB Registrar, Ojerinde released on bail after 10 days in Prison

The former Registrar of the Joint Admission and Matriculation Board (JAMB), Professor Lawrence Adedibu Ojerinde has at last been released on bail after spending...
Read more