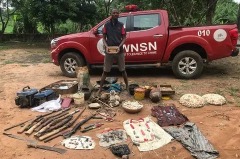 The suspect was arrested in the midnight on Saturday and paraded by Amotekun operatives on Tuesday.

Col. Olayinka said they cut these body into pieces and sell them.

The Amotekun chief disclosed that they had been on Abdulrasheed’s trail for months and engaged a young man as a mole before they were able to arrest him.

The commandant stated further that another suspect, known as Baba Ishola, is currently at large after he became suspicious that Abdulrasheed had been arrested.

Col. Olayinka said the suspect would be transferred to the state police command for further investigation.

The 40-year-old suspect, Abdulrasheed who spoke to the Nigerian Tribune said he had never killed anybody before but confessed to exhuming dead bodies.

He said that he learnt about corpse exhumation from his master under whom he trained as a herbalist in Apomu, Osun State.