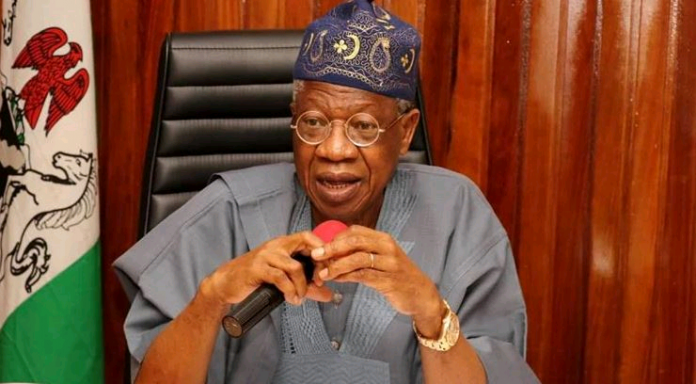 The government of President Muhammadu Buhari has threatened to ‘deal’ with television and radio stations in Nigeria over alleged breach of broadcast ethics.

The FG said it might be forced to give the affected media organisations ‘red-card’.

The TV and radio stations were alleged to have broadcast anti-Buhari interviews.

The Minister of Information and Culture, Alhaji Lai Mohammed, made this known while speaking with the News Agency of Nigeria on Wednesday in Sal Island, Cape Verde.

Recall that the National Broadcasting Commission recently invited presenters of Channels Television and threatened to sanction the broadcast station over an interview with Benue State Governor Samuel Ortom.

The interview, which attracted a harsh reaction from the president, was considered to be against the President.

The minister was said to be in Cape Verde to attend the 64th Conference of the UN World Tourism Organisation Commission for Africa and the Second Edition of the UNWTO Global Tourism Investment Forum.

NAN quoted the minister as saying that the National Broadcasting Commission and other regulators would ensure that broadcast stations abide by statutory laws and ethics.

He said any station that violated the broadcast code and ethics would be “shown the red card.

“We agree that there are challenges but the government is doing its best in addressing insecurity, banditry, insurrections, and fixing the economy.

“What one expected from these leaders at this trying period is support and encouragement.

“It is, however, quite disturbing that they have thrown caution to the winds and it is no longer about leadership and maturity but about who can say something that can break this country.

“Certain words that we were afraid of using before such as genocide and ethnic cleansing, are now taking over the media waves.

“That is why it is important to call everybody to order to appeal to their sense of patriotism that they should understand that because there is a country called Nigeria, that is why they are leaders.

“If what they are praying for happens, they will no longer be leaders but servants in other countries.”

NAN also quoted the minister as saying, “In the last few weeks, the country has been awash, especially from the broadcast media, with very incendiary rhetoric which has created a sort of panic in Nigeria.”