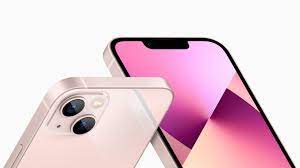 Apple  on Tuesday presented to the world the first look of its new iPhone 13 during its annual product event hosted live from its headquarters in Cupertino, California.

The 6.1-inch smartphone keeps the sleek design and ceramic front shield as its predecessor, but now boasts a diagonal camera lenses design for the new dual system.

The camera system captures 47 percent more light in a scene and includes the sensor shift stabilization that helps counterbalance any movement within the camera to take focused shots.

One of the latest and many iPhone 13 rumors said the smartphone would launch in a new pink color and that is what users can purchases – the new shade is also available for the iPhone 13 mini.

Customers can also purchases the iPhone 13 in blue, ‘midnight,’ ‘starlight’ and product red.

However, the largest upgrade is an increase in battery life: the iPhone 13 provides 2.5 more hours than the iPhone 12 and the iPhone mini gets 1.5 extra hours of power.

Apple hosted the event online for the second time since the coronavirus pandemic swept across the globe in 2020.

But the virus has not stopped the tech giant from sharing its latest and greatest products with the world.

Apple CEO Tim Cook strode through a slickly produced video Tuesday to launch a new iPhone, with few hints of the exceptional string of troubles facing his company including policy reversals, a spyware attack and legal fights.

Cook, from an empty, darkened auditorium, raved over upgraded cameras, brighter screens and new features for some of the Silicon Valley giant’s other devices like the iPad.

‘These are the best iPhones we’ve ever created,’ Cook said, noting Apple’s work to design the ‘very best products and services to enrich people’s lives.’

The new iPhone 13 is not a completely redesigned Apple smartphone, but includes subtle changes that improves performance and user experience.

For example, the Face ID notch is 20 percent smaller than what is featured on the iPhone 12.

The latest device is also powered by Apple’s new A15 Bionic Chip, the iPhone 13 includes an up to 50 percent faster CPU than the competition, along with delivering up to 30 percent faster graphics.

The iPhone 13 has six cores and a specialized portion for running artificial intelligence algorithms.

And the iPhone 13 and iPhone 13 mini both have larger batteries to give them more power than their  predecessors.

The biggest change, which seems to come with each new iPhone, is the upgraded dual camera system, with one camera having a a larger sensor for a wider camera.