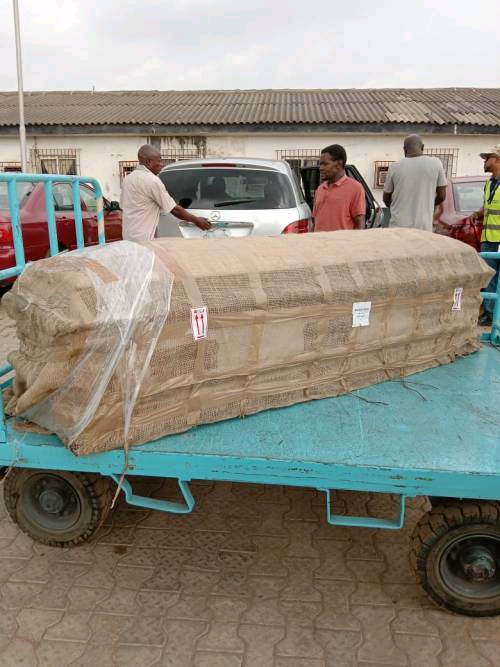 The remains of prominent Nigerian businessman, Olusola Solarin who was shot dead by robbers in Pretoria, South Africa have arrived in Nigeria.

Franktalknow learnt that the corpse was repatriated to the country on Friday, December 31 after delays, to be buried on January 3, 2022.

It was confirmed to SaharaReporters that the body had been received at the Murtala Mohammed International Airport, Lagos.

“His body will be kept at the Military Hospital Morgue in Yaba,” a source told newsmen on Friday after its arrival in the country.

The deceased was the husband of Doris Ikeri-Solarin, who was recently elected as the Vice President of the Nigerian Union South Africa (NUSA).

He was attacked in his shop on Sunday, December 12 and killed by the assailants some distance away from the shop.

The family of the late Nigerian businessman on Wednesday announced the postponement of the burial of the deceased, initially planned for December 30, 2021.

However, a statement signed by Mr. Bayo Folarin for the family, which was titled ‘Update On The Burial Plan’ and made available on Wednesday, said the new date for the burial would be announced later.

The statement had read, “The family of Solarin wish to announce the postponement of the funeral rites of Comrade Olusola Ayotunde Solarin that is scheduled to hold tomorrow, 30th December 2021

“The new date would be announced before the close of work tomorrow.

“We wish to apologize for any inconvenience this notification may have caused you.”

The Nigerian community in South Africa last Thursday honoured the late businessman with a service of songs.

The service was held for Solarin on Thursday, December 23, at the Jesus The Breath Of Life International Ministry in Pretoria.

The lying in state and service of songs lasted three hours, between 4 pm and 7 pm.

Several tributes were paid to the beloved Comrade Olusola, who would be remembered for his selflessness, big heart, and active support for the Nigerian community and Nigeria as a nation.

Rev Dr. Harold Anagu described Sola as “a good, faithful, loving, understanding, and Godly man, husband, father, uncle, and son to this generation, Africa, our nation Nigeria, to the Nigerian community in South Africa, to his extended and immediate families”.

“How we love that you are here, but thank God you are now in his presence, where there is no wickedness or sorrow, rest on In Peace sir, we love you and your precious wife, children, and family in Jesus gracious name,” the cleric had added

Adetola Olubajo, the immediate former President of the Nigerian Union in South Africa, had told SaharaReporters that Solarin was killed in an area called Highway Park, “not far from a notorious area called Tembisa”.

“The thugs entered the shop, took money, mobile phones and so on and took him a few metres away from the shop. Then they shot him several times. That is the eyewitness account we got,” he had added.

Olusola Solarin’s death came a few months after the murder of another Nigerian, Okechukwu Henry, from Imo State as announced by Ben Okoli, President of Nigerian Citizens Association South Africa.