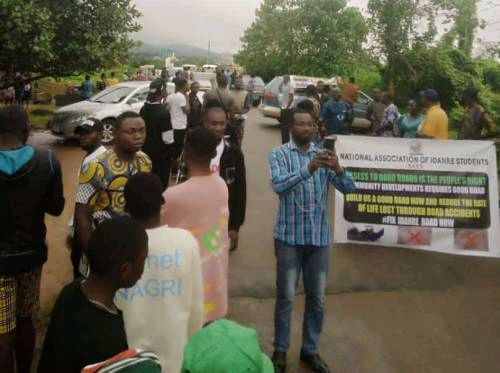 Some really angry youths under the aegis of National Association of Idanre Students have blocked the access roads linking Idanre town to Akure in Ondo state to protest against the deplorable state of the road.

The scores of angry youths barricaded the bad sections of the roads as motorists were forced to find alternative routes to go into or out of the town.

The development has led to gridlock on the affected roads, leaving motorists and commuters helpless.

Displaying placards with various inscriptions to pads their message across to the authorities, the youths vowed not to leave the roads until their demands are met by the state government.

According to them, the routes have become a nightmare and deathtrap as hoodlums have turned the failed sections of the roads to robbery zones.