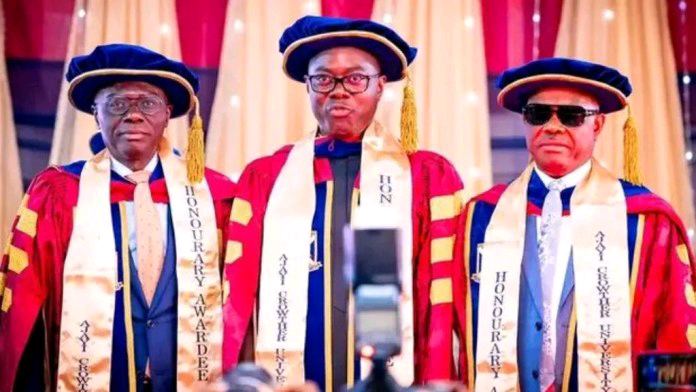 The governors were conferred with the honor on Friday, December 9, 2022, during the grand finale of the 14th convocation of the university.

The vice chancellor, Prof Abiodun Adebayo said the three honourees have contributed immensely to the progress of the country, and were proud members of the Church of Nigeria (Anglican Communion), the proprietor of the school.

He said 1, 547 undergraduates would be admitted into first degree, among them 41 students who bagged First Class Honours; 583 would be awarded master’s degree, and 34 doctorate degrees.

Adebayo said the university has been working round the clock to complement the efforts of the federal and state governments to ensure food security, eradicate hunger, and deal with poverty in the country. He said the institution had established an agro-allied company – Ajayi Crowther University (ACU) Seed Company, for the production of high yielding seeds and seedlings.

The company, he said, is the first of its kind in the history of Nigerian universities, adding that ACU is in partnership with the National Agricultural Seed Council (NASC) and the International Institute of Tropical Agriculture (IITA) on the project.

Reacting in a post on his social media page, Seyi Makinde said; “It was an honour to be conferred with the Doctor of Science (D.Sc.) in Engineering (Honoris Causa) at the 14th Convocation of the Ajayi Crowther University, Oyo today along with my brothers, Governor Nyesom Wike and Governor Babajide Sanwoolu who were also awarded honorary degrees.

“In my remarks at the graduation ceremony, I thanked the management of the University for the honour bestowed on my colleagues and I and congratulated all graduands on the remarkable achievement of getting their doctoral degrees.”